Bessemer detour to begin May 31 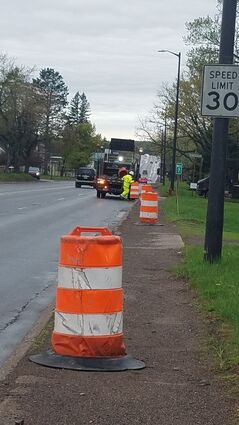 Charity Smith/Daily Globe A crew puts out traffic cones along U.S. 2 in Bessemer on Friday morning in preparation for a summer of road and infrastructure work.

BESSEMER - Construction season is fast approaching and Bessemer is gearing up for the second phase of its two large construction projects: a rebuilding of U.S. 2 through town and the city's water and sewer project.

The Michigan Department of Transportation and city officials have announced that a detour of eastbound U.S. 2 traffic along city streets south of the highway will take effect May 31 and last through early September.

"This summer is going to be hectic. There are a lot of good things happening in Bessemer and with this progress comes construction and detours," said city manager Charly Loper in her monthly newsletter. "Getting through town is going to take a bit more time, but in the long run, it will be really nice."

MDOT is reconstructing U.S. 2 through Bessemer, in part making what was four lanes into three, and while this project is happening, the city is taking advantage of the streets being torn up and is replacing the water and sewer lines under the highway.

"This is saving our residents from having to pay to reconstruct U.S. 2 if we did this project at another time," Loper said.

According to Loper, when the project is closer to the center of town, the right-of-way is more narrow and the construction can't have two lanes of traffic on the highway, making it necessary to have a detour.

Eastbound traffic will be detoured from U.S. 2 onto South Mill Street, then to West Galena, and then head south on Moore Street, east on Longyear Street to Peck Street and back north to U.S. 2. There is the option of having Clayberg Street as a circle- back route. Drivers can take Clayberg to the north and get back to U.S. 2 heading westbound for those with city business to get to.

"We've gotten a lot of questions about why the eastbound detour is in this location. We know it's not a great detour. There wasn't a good place to put a detour," said Loper. "This route was the least bad route."

She said they had looked at some other options for the detour, but they all had their downfalls.

She said covered detour signs are being placed around town this week and will be revealed next week. According to Loper, there will be some changes throughout town as far as stop signs go. She said that there will be some stop signs in place where there didn't use to be and that places that had stop signs may no longer have them there through the detour phase.

Loper said the water and sewer mains are buried deep at the Sophie Street and Moore Street intersections of U.S. 2. Therefore when those two intersections are dug up, there won't be room for any traffic on the highway, which will bring a detour of westbound traffic as well during that work after the Fourth of July. The westbound detour going past the high school will start July 5 and run for five weeks. It will go from Case Street north to Iron Street, west on Iron and then south on Mine Street back to U.S. 2.

After the project, workers will be touching up any streets that were damaged through the detour, Loper said.

MDOT will be paying for additional law enforcement officers to monitor the area. The city is anticipating that locals will find their own routes through town. Therefore there will be additional patrol officers in other areas of town to monitor for speeding. The city asks residents to remember they are not on the highway when using city streets to cut across town during construction.

The westbound ATV trail detour route heads south on Peck Street, then goes across the city on Sellar Street and returns to the trail just past Hematite Street. It is reversed for eastbound traffic. The detour is already in use and is anticipated to be in effect through the summer.

"Once more, this isn't a great location. We wanted to run it down Colby, but there will be construction on Colby starting soon. We can't run it down Mary because the ATVs would have to run with the U.S. 2 detour route on either Moore Street, Clayberg Street, and/or Peck Street and this isn't safe," said Loper.

The detour location may be changed at some point during the summer, she said, as a result of construction on Sellar Street by Washington Elementary School. That will happen when school is out.

Loper said the 200 block of East Longyear between Sophie Street and Case Street is getting a mill and overlay on it next week in preparation for the amount of use it will take during the detour.

She said there is also construction in Yale on Barber Avenue and Eli Avenue, and on Hematite Avenue. Loper said that once they complete construction in those areas, construction will begin on Colby between Mine and Moore. She said there will also be construction on three sides of Washington School in the summer. Other areas to expect construction include: Tilden Hill by the water tank, Spring Street, 3rd Avenue, 4th Avenue, Yale Avenue, Tilden Road and, after the detour ends, much of north Moore Street.

The city thanks the community for their patience during this massive construction season ahead, said Loper.