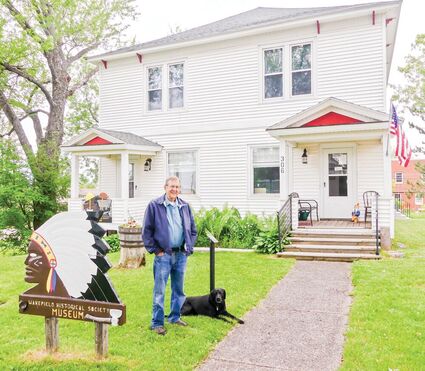 STANDING IN front of the Wakefield Historical Society Museum is Bernie Ylkanen as his dog, Nisu, takes a break from fetching sticks. As a museum docent, Ylkanen hosted a Tuesday open house at the main street location. The museum also will be open on July 4.

WAKEFIELD - Members of the Wakefield Historical Society Museum flung open its doors Tuesday with a quiet open house to start the summer season.

Bernie Ylkanen, a museum docent, hosted the "Forchuly" event with his dog, Nisu, who was happy to meet new friends.

Ylkanen said it's likely that other museum personnel will be there most of that day as the parade, which attracts a large crowd...