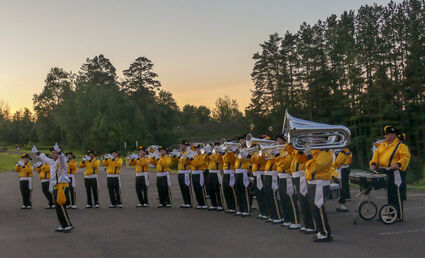 P.J. Glisson/Daily Globe PERFORMING WITH their usual panache at Saturday evening's Independence Day festivities in Ramsay are members of Marty's Goldenaires, under the direction of Dan Pitrone at left.

RAMSAY - It could be said that the crowd at Ramsay's Independence Day celebration was so full of energy that no pyrotechnics show was even needed.

However, the actual fireworks - aptly named "Rumble Over the River" - also were awesome.

Saturday's festivities, which started at 6 p.m. and lasted the rest of the evening, attracted hundreds of friendly folks - several with cowboy hats adorned with U.S. flags - who gathered along the entire length of Main Street.

Behind the Bessemer Township Fire Hall, a canopy tent was set up to house SLAB Band, whose live music had people either dancing on th...