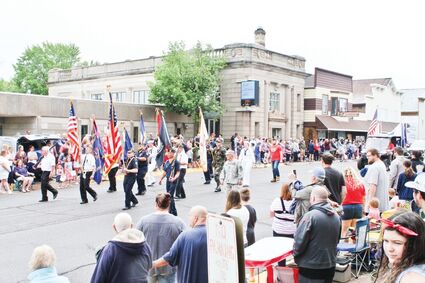 David Manki, a retired U.S. Army lieutenant colonel, leads a color guard as they march north on Sunday Lake Street in Wakefield during the Fourth of July parade on Monday.

WAKEFIELD - Light showers on Monday afternoon weren't enough to stop the Fourth of July celebrations in Wakefield, with the parade starting at Cormier's Corner and proceeding on Brotherton and Sunday Lake streets.

City and area residents lined the streets of downtown Wakefield to watch the parade from camping chairs and bleachers, while children prepared to gather any candy thrown from the parade floats.

Before the general parade started, a group of children travelled from the fire department to the old city hall on Sunday Lake Street. Many entra...