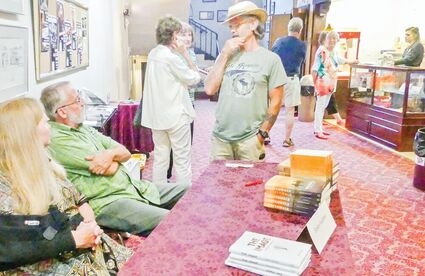 STANDING AT right, Ken Hazel of Ironwood shares a light moment with visiting author Steven Faulkner and his wife, Joy, seated at left on Sunday evening. Faulkner was at the Historic Ironwood Theatre to host a showing of the movie "WaterWalk," which is based on his adventure book titled "Waterwalk: A Passage of Ghosts." The non-fiction book is about a canoe trip that Faulkner took with his son, Justin, retracing the 1673 route of explorers Father Jacques Marquette and Louis Joliet.

IRONWOOD - Some folks love to take on adventure, while others prefer to live vicariously through the escapades of other people.

On Sunday evening, the Historic Ironwood Theatre offered both types of people an exciting view of a father-son canoe trip that was based on a true story starting right here in this region.