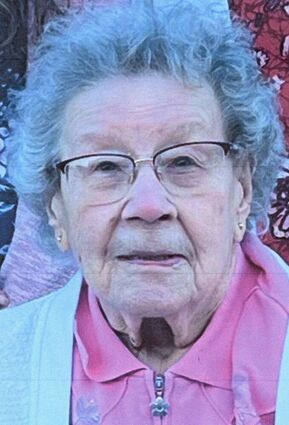 Marguerite was born on Jan. 13, 1930, in Topaz, a daughter of Sigurd and Irene (Osier) Hokens. She attended Bergland High School and graduated in 1947.

On May 6, 1950, Marguerite married Carl F. Barthels at the Trinity Lutheran Church in Bergland, and they were blessed with three children.

For 23 years, Marguerite worked as a secretary for the Gogebic-Ontonagon Intermediate School District. Previously, she was employed at the State Bank of Ewen and the Ontonagon County Agriculture Office in Ewen.

Marguerite enjoyed attending church services at Trinity Lutheran Church, baking, canning and tending to her garden. Her grandchildren and great-children enjoyed all the "goodies" she baked for them, especially her cookies. She was a supporting member of the American Legion Auxiliary and the Lake Gogebic Senior Citizens Center in Bergland.

She was preceded in death by her parents; her beloved husband, Carl, in 2000; and her son-in-law, Ron Schultz.

A funeral service will be held on Thursday, July 28, at 11 a.m. EDT, preceded by visitation at 10 a.m. EDT, at the Trinity Lutheran Church, 404 Birch St., in Bergland, with the Rev. Timothy J. Steckling officiating.

A committal service and interment will follow at the Lakeview Cemetery, Bergland.

Luncheon will be served in the church fellowship hall immediately upon return from the cemetery.