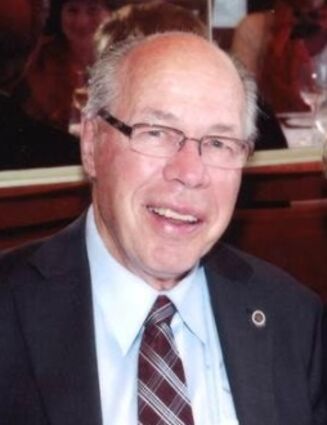 Wayne was born in Regina, Saskatchewan, where he went to elementary and high school before earning a hockey scholarship to the University of Michigan. While there, he met the love of his life, Myrna, who ultimately became his bride. They were married in 1965 in Ironwood, Michigan, and enjoyed a loving union of nearly 54 years before her passing in July 2018.

Wayne was a hard-working, well respected educator and administrator in the Regina Catholic School system serving as a teacher, principal and superintendent.

Wayne's lifelong passion, outside of his family, was hockey. After his playing career, he became an official in the Saskatchewan Junior Hockey League (SJHL) and Western Hockey League, and then coach of the Regina Pat Blues, earning coach of the year honors in 1976. At the end of the 1977 season, Wayne took on the role of president of the SJHL, a position he held for 26 years. In addition, he took on many other roles in hockey over the years and received many honors and awards, including being installed in the Saskatchewan Sports Hall of Fame, an honor that his father, Mike, received in 1984.

Outside of his hockey and educational commitments, Wayne was an incredible role model for his children, Mark, Lisa and Mick. He was a loving Papa to his grandchildren Andrew, Nathan, Matthew, Kate, Noah and Layla. He always enjoyed getting updates on the athletic and academic achievements of his grandchildren.

Wayne spent summers and enjoyed time with family and extended family at their place in Ironwood. He golfed a lot at Eagle Bluff where he shot his only hole-in-one and loved the scrambles he attended regularly.

Though Parkinson's limited his mobility during his 25 year battle with the disease, Dad remained sharp minded. He was able to follow his favorite sports teams (Montreal Canadians, Green Bay Packers, Saskatchewan Roughriders and Michigan Wolverines) and wore their logos with pride.

He will be missed, but our memories and his legacy will be cherished with great pride for many generations to come.

We are grateful for the kind and loving condolences that have poured in with the news of his passing. In lieu of flowers, anyone wishing to make a donation in his honor is kindly directed to the Parkinson's Association of Saskatchewan.

Online condolences may be shared at wilsonsfuneralchapel.ca/obituary/Wayne-Kartusch.