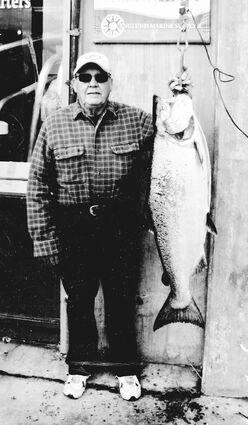 GARDEN GROVE, Calif. - David Saari, a former resident of Iron Belt, Wisconsin, passed away on Sept. 22, 2021, at the age of 87 in Garden Grove. He is survived by his wife of 67 years, Gayle (Barto) also of Iron Belt; his son, Greg; and daughter, Elizabeth.

A devoted husband, great father to Greg (Leslie) and Elizabeth (Geoffrey); he is also survived by this grandchildren, John (Kimberly) and Laura (Dominic); great-grandfather known as "Big Papa" to Dayne, Avery, Elle and Kingston; his special sister and brother-in-law Sylvia and Patrick Hanson; and many nieces, nephews and cousins.

A graduate of Iron Belt High School, David went on to serve in the U.S. Navy and worked at the White Pine Copper Mine prior to moving West with Gayle and his two children. He accepted employment at Associated Diesel in Wilmington, California, as a diesel mechanic and later became the service manager, retiring at the age of 65 in 1999.

David was an avid fisherman, a huge fan of the Green Bay Packers, and enjoyed traveling together with Gayle in their motorhome.

In memory of David, his immediate family recently gathered for dinner to celebrate his life.

Remembered for his tremendous work ethic, moral background and being a wonderful provider, he was a man of few words with a quiet strength and presence. He gave generously and never asked anything in return. Loved beyond words, he is missed beyond measure.