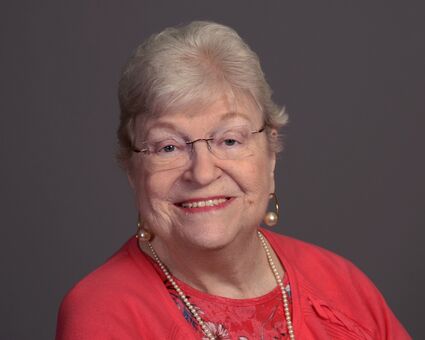 APPLETON, Wis. - Our mom, JoAnn Emma (Mitchell) Reinholtz, died peacefully at Rennes Rehab Home in Appleton, on Monday, Aug. 1, 2022, at the age of 88 years old. Mom fell in her apartment on July 1 which took her first to the hospital, then to rehabilitation with the hope she would return to her home at the Appleton Retirement Community (ARC). However, God's plan was different. He knew she was tired and weak and He took her home.

Mom was born to Josephine Pauline (Peckstein) and Thomas Mitchell on June 2, 1934, near Ironwood, Michigan. JoAnn was the youngest of three children, Tom (Bette) both who preceded her in death and Jack, 99 years old, (Ruth) living in Ironwood.

As a teenager, Mom was baptized and confirmed at Wesley United Methodist Church in Ironwood. After acknowledging her faith with confirmation, she became a lifetime servant of the Lord starting with high school youth group. She graduated in 1952 from Luther L. Wright High School. Mom was a smart young woman but family finances did not allow her to attend college. Instead, she began her career as a business woman. Her first position was with Walter Meyer Sausage Company as a bookkeeper and office manager.

At the age of 31, Mom met her husband, our dad, Clarence Reinholtz and they were married in October 1965. Two years later, their lives changed forever when Sara Jean and Amy Sue were born.

As a family, we spent most of our life in Menasha, where we attended Trinity Lutheran Church. While we were in grade school, Mom "worked" as a volunteer. Mom served in many capacities including church school bookkeeper, lunch helper and Parent Teacher League member and president. She could whip up a costume for an operetta, create a cookbook, organize a fundraiser or plan a banquet with her eyes closed.

As we were preparing to start public school, Mom found a real job – treasurer of the town of Menasha. She loved this job. She was initially appointed to the role and eventually ran for re-election, winning several times. This part-time job increased her knowledge and stretched her skills. She enjoyed participating in the political process and learning about municipal financing and investment, as well as collecting taxes.

In 1986, Dad's career with the state of Wisconsin brought them to Madison just as we were starting our sophomore year of college. Mom missed her career in the Fox Valley but quickly found a job administering COBRA which had become law the year prior to their move. She worked at the Wisconsin Teamsters in Madison until she and Dad retired. While in Madison, Mom and Dad were members of Immanuel Lutheran Church where they again found ways to volunteer and share their gifts.

In 1993 when they retired, Mom and Dad started an adventure of a lifetime. They purchased a 5th wheel trailer and traveled the country. After two years of travel, they made their home in Weslaco, Texas, where it is always warm.

In Texas, JoAnn and Clarence found a church home at Immanuel Lutheran Church in Mercedes, Texas. Mom again found her places to serve. She and Dad both served as president of Ranchero Village Circle; she was the church bookkeeper; led Bible studies; judged science projects at Immanuel's school; and anything else they asked.

Dad passed away in 2009 and in October 2016, Mom sent us an email saying she was ready to move closer to us. She no longer wanted to drive or make so many decisions. We sprang into action and by May 2017, Mom was settled in her Appleton apartment. While at the ARC she participated in the resident council, book clubs and Bible studies. Mom also joined Faith Lutheran Church.

Mom had some very special people in her life who brought her great joy and who will miss her sense of humor, wisdom and servant's heart: Marilyn Conklin, Lupita Almanza and her wonderful family, Cassie Demerath, Jackie Gonzalez, Karla Campbell, Denis Ashauer, Dennis Bowman and the pastors at Eternal Love Lutheran Church. We also want to thank Faith Lutheran Church for live-streaming church services, Bible classes and "Ask the Pastor." Mom became real fans of the Faith pastors even though she could not attend in person.

Mom was the last of the Reinholtz clan - Dad and his five brothers and sisters, as well as their spouses, all greeted Mom in heaven. We and our spouses survive her: Amy Mojica and son-in-law, Daniel, of Sheboygan, and Sara Saxby and son-in-law, Jeff, of Appleton. Mom has one precious grandson who made her smile everyday, Erik Saxby, and his girlfriend, Cameron Haen, of Madison. Erik spent several months working at the ARC as a caregiver, which delighted Mom. He would spend his breaks resting on her couch. After watching him in action, she knew he found his vocation in nursing.

Our mom was a Christian. She lived each day with Jesus in her heart. She and Dad always told us "People will know you are a Christian by how you live your life.'' Mom was that kind of witness. God loved her; she knew his love; and she shared his love.

There will be a memorial service for Mom at 5 p.m. on Friday, Aug. 5, at Wichmann Funeral Home, 537 N. Superior St., in Appleton. A visitation will be held prior starting at 4 p.m. Please dress casually.