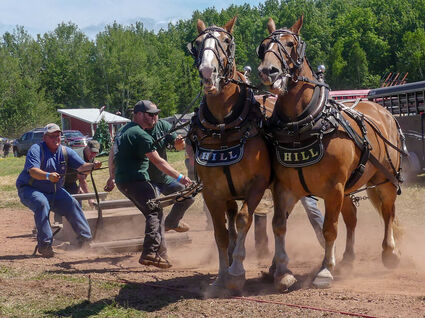 WITH A LITTLE help from his friends, Mark Hill (hidden in the middle) works hard to get his horses, Jay and Jim, connected to a weighted sled during Sunday's draft horse pulling contest at the Iron County Fair in Saxon. At far left, crouching, is Dean Kurth, and behind him is David Hill. Standing in front wearing sunglasses is Justin Wachowski.

SAXON, Wis. - One of the most popular events at this year's Iron County Fair was the draft horse pulling contest, in which four 2-horse teams pulled thousands of pounds in an attempt to show who's boss.

It turns out that every team left with an award, but that seemed less important than the sheer excitement that the Sunday contest generated among all parties: horses, drivers and members of the audience who watched in anticipation from the fairground grandstands or from behind a fence surrounding the track.

The horses were magnificent, not only for their strength, but also for their bulk and...