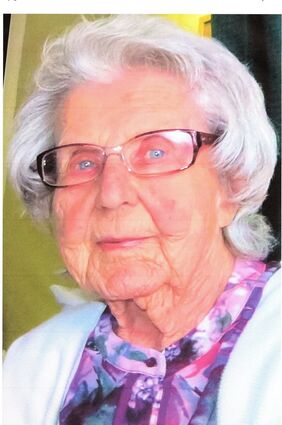 IRONWOOD, Mich. - Barbara I. Jackson, 96, a longtime resident of Erwin Township, passed away peacefully on Tuesday, Aug. 9, 2022, surrounded by her loving family at Westgate Nursing, Rehabilitation and Assisted Living Community in Ironwood.

Barbara grew up in Iron Belt, Wisconsin, and was raised by her grandparents, Nick and Ida Eilo, along with their 12 children.

She attended Iron Belt schools and graduated in 1944, as salutatorian. Barbara was married to Robert Jackson on Feb. 15, 1947. They made their home in Erwin Township.

After her husband died in a mining accident in Arizona, she raised their five children. During those years, she found time to serve as an Erwin Township trustee and an election clerk. Barbara was a kind and generous person. Barbara was so proud of her family whether babysitting, or providing home care for the elderly, she was always willing to help.

Besides her mother and husband, she was preceded in death by her youngest son, Thomas, and his infant son, Thomas Richard; two brothers, Wesley and John Johnson; a sister, Evelyn "Joyce" Mezzano; three brothers-in-law, Raymond Mezzano, Joseph Ebli and Raymond Jackson; and her sister-in-law, Sigrid Hantula.

But we remember now in love, your life from start to end, and we're just glad we knew you, as mother and as friend.

Out of respect for Barbara's wishes, cremation has taken place.

Honoring her life, a private family graveside service will be held at the Riverside Cemetery in Ironwood, with Chaplain Matt Agee presiding.

The family would like to thank the staff at the Westgate Nursing Center for their care and compassion shown to Barbara during her stay there.