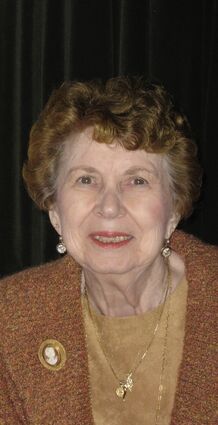 RIPON, Wis. - Lina Stella Caruso died peacefully in her sleep on Sept. 19, 2022, at Maplecrest Manor Assisted Living in Ripon. She was 99 years old.

Lina, formally known as Ursalina Catherine Stella, was born on Aug. 20, 1923, in Wakefield, Michigan, to Valentino and Irene Stella. She graduated from the Luther L. Wright High School in Ironwood, Michigan, in 1941. Lina was the oldest of four children and at a tender age played a major role parenting her younger siblings (Eugene, Valentine and Delores) who have all preceded her in death.

Both of Lina's sons were born in Baraboo. Over the next decade the family lived in Joliet, Illinois, Baltimore, Maryland, and Glen Rock, New Jersey, before returning to Wisconsin. Lina resided in Wisconsin Rapids, from 1967 to 2020, and recently moved to Ripon to be closer to Fred and his family.

Lina was a faithful woman who loved the Lord, her family, church and community. She devoted many years of volunteer work to the Women's Auxiliary of Riverview (Aspirus) Hospital and volunteered her time preparing tax returns for residents at the local senior center. She was a faithful Catholic her entire life and an active member of the St. Vincent de Paul Catholic Church congregation.

Lina loved ballroom and line dancing. She was a skilled and avid bridge player who was known by many as a "card shark." Lina stayed in touch with family and friends through cards, letters and gifts.

Lina was an extremely generous and caring person with a great sense of humor. She will be missed terribly by her friends and family.