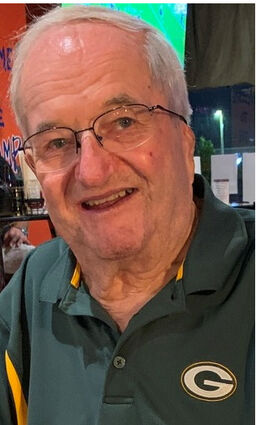 Bob attended Norrie Elementary School and graduated from Luther L. Wright High School in 1949. He worked at the Cary Mine and took up the sheet metal trade. He worked at Stillwell Sheet Metal in Ironwood, then worked for API as a supervisor, ultimately retiring in 1993 as a project superintendent.

Bob married Kathleen "Kay" Mazzon on Sept. 5, 1953, at St. Ambrose Catholic Church in Ironwood. They were married for 52 years until Kay’s passing in 2006.

Bob was an avid outdoorsman who enjoyed hunting and fishing with family and friends, and especially enjoyed spending time at their cottage in Vilas County, Wisconsin. Prior to retiring, he and Kay took up golf and it quickly became a favorite pastime that kept them active. In the mid-90’s, they purchased a second home in Lake Wales where they enjoyed spending time golfing and socializing with their friends.

Bob is survived by his three children, David (Marybeth) of Chicago. Donald (Lori) of Michigamme, Michigan, and Janice (Mike) Sweeney of Lakewood Ranch; grandson, Kyle (Abbey) of Calumet, Michigan, and their sons James and Kaden; granddaughters, Erin and Lauren of Chicago; grandsons, Tim of Rhinelander, Wisconsin, and Brian of Milwaukee; and numerous nieces and nephews.

The family would like to express their thanks to the staff at The Sheridan at Lakewood Ranch assisted living facility for their excellent care shown to Bob over the past several months.