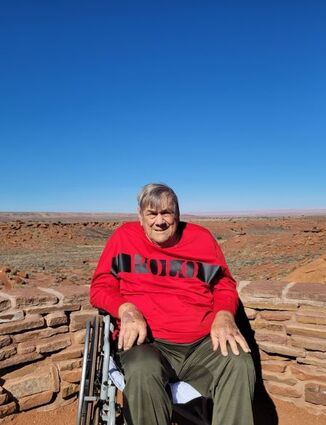 ALBUQUERQUE, N.M. - Harold Erickson, cherished husband, father and grandfather passed away on Sunday, Nov. 20, 2022. He would have been 83 in just one month.

Harold was born in Bessemer, Michigan, on Sunday, Dec. 24, 1939, the fourth of seven sons born to Walter and Viola (Jacobson) Erickson. He graduated from A.D. Johnston High School in Bessemer in 1958, and began the hard work of logging and roofing in the local area. On Saturday, April 11, 1959, he married his high school sweetheart, Joyce (Erickson, no prior relation), and they would ultimately share a married life together for 63 years.

In 1959, Harold and Joyce loaded up a Chevy coupe and a small tow trailer with every possession they owned, and left the Upper Peninsula of Michigan for the opportunities offered by a growing Albuquerque. Upon arriving, Harold found work as a carpenter, and not long after, Joyce attended pharmacy school at the University of New Mexico. Their new life in New Mexico began to take off.

Harold, along with his brother, Donald, formed Erickson Construction in 1962. Together, they built single-family homes, hotels, motels, office buildings, and large apartment complexes across New Mexico and much of the Southwest. They were famous in the construction industry for their innovative ability to construct projects in record times, even being recruited back to Michigan to build a large complex in the Detroit area. Their success in construction ultimately led them to begin building several apartment complexes of their own in the Albuquerque area, which they owned and managed for decades.

Harold loved and supported the New Mexico Lobos for over 57 years, and only rarely did he miss a game. His love for the game of basketball extended beyond the Lobos, as he attended many NCAA playoffs and Final Fours. He was also an avid horseman, owning and breeding many racehorses that competed across the country. He enjoyed a good heated conversation about politics and loved spending many mornings with close friends at the local truck stop for coffee. He was not adverse to giving those friends a good ribbing. He was a man of the outdoors and enjoyed fishing and camping. He loved to travel and did so all over the world, and best enjoyed trips which he and Joyce shared with their grandchildren.

Harold was known for his generosity and practicality. He once caught some burglars one late night, who had broken into a day care center which he owned. Among other things, they were stealing food. So Harold grabbed a box, packed them some food and sent them on their way. Asked why he would do such a thing - give food to people who were robbing him - he replied simply, "Because they were hungry."

Harold was preceded in death by his parents; his six brothers, Raymond in infancy, Donald, David, twins Ray and Roy, and Bryon; a grandson, Adam Jaeger; and also his mother- and father-in-law, Edwin and Laura Erickson, of Ironwood Township. He is survived by his wife, Joyce; son, Dale (Kim); daughters, Christine (Todd) Jaeger and Denise; grandchildren, Ashley Jaeger, Elisabeth (Erickson) Shows, Sarah Jaeger, Alex Erickson and Joshua Jaeger; and one great-grandchild, Isabella Shows.