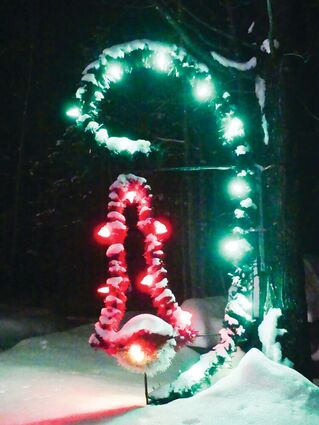 THIS BELL hangs in the Wakefield yard of Jason and Stephanie Gustafson. Throughout the mid-1990s, it once hung on the streets of Bergland.

Wakefield - Christmas often inspires memories of childhood and other bygone days, especially those most reminiscent of the greatest holiday spirit.

That is especially the case with Jason Gustafson, whose yard on Indianhead Road in Wakefield is a testament to vintage holiday lights.

"I always go back to nostalgia," said Gustafson, who is the superintendent of the Wakefield-Marenisco School District. He lives with his wife, Stephanie, and their daughter, Katelyn. Their grown son, Alex, also lives nearby in Wakefield.

Gustafson remembers the joy he felt when his parents bought a blow-mold decoration of Santa and Mrs. Claus in 1985.

Blow molds are large, 3-dimensional figures - often in distinct holiday shapes of candy canes and other iconic images - that are somewhat similar to inflatable holiday decorations, but that are instead made of plastic with interior lighting for illumination.

"It was the first one that we owned as a family," said Gustafson of his parents' purchase, which is now displayed in the front window of his home.

Moreover, he claimed, "As a child, I was always so excited when the towns put their decorations up. They were the true kick-off of the holiday season for me."

Hence, about four years ago, he came home with a bell decoration that had been retired by township officials in neighboring Ontonagon County.

"I can do something with this," he remembers thinking of the unit that had hung on Bergland streets through the mid-90s.

Gustafson since has collected almost two dozen vintage municipal lights, and many of them are now on display outside around his home. His son helps him to score his finds.

The history of some units - often seven or more feet high - goes back to the middle of the 20th century.

Not surprisingly, the one that Gustafson considers "most sentimental" is a star retired by the city of Wakefield. He also has an old tree light from the city.

His "personal favorite" is a stocking purchased second-hand from a collector, but he remembers it being displayed in the 1980s on main street light posts in Bessemer.

"This was when the light posts on the main street were tall poles like on the highway," he noted. "When I got this municipal (item), it was in terrible shape. I stripped the entire decoration down."

The same unit now has new commercial-grade tinsel and LED bulbs. LED stands for light-emitting diode. In turn, a diode is defined as "a semiconductor device with two terminals, typically allowing the flow of current in one direction only."

Gustafson said LED lights are more costly to buy than regular light bulbs, but he added that they save money in the long run.

The structure of each vintage municipal light typically is made from rebar, which is a steel rod that can be bent.

Gustafson's most recent acquisition is a pair of reindeer that he bought earlier this month from the Bruce Crossing Volunteer Fire Department.

"I rewired the reindeer and upgraded to LED lights," said Gustafson of the units that were displayed in Bruce Crossing 20 years ago. They are now lit on each side of his garage.

His oldest decoration was a "Season's Greetings" sign manufactured in the 1950s. At the time he purchased it, the unit contained 33 full-size standard light bulbs.

"It used so much power that it has its own twist-in household fuse built into it," said Gustafson. "You could hear the electricity pop loudly when you plugged it in. I updated it to LED carnival bulbs to cut down on energy consumption."

He also has acquired other decorations from Wisconsin such as a silver bell from Saxon and a poinsettia and a double candle from Wausau.

"The cheapest part is actually the purchasing," said Gustafson. "I can get them anywhere from free to $200."

Sometimes, however, it can take another $200 to restore a single unit.

"It's not a cheap hobby, but they last," said Gustafson. "I enjoy it."

As for setting up his display, he said it's "pretty easy" due to careful preparation. "I made some brackets, and I ordered some online," he said. "I try to set them up before the snow falls."

Then, the decorative units can just be placed on the brackets at some point after Halloween.

Gustafson said he'd like to find more of the older blow molds. "Those are really rare," he said, adding that he likes their "old Victorian look."

Next year, he said he hopes to expand his display.

He likes that the lights give people pleasure. In fact, once Christmas is over, he will still display large, lighted snowflakes.

He gets a kick out of the fact that the bus drivers who transport skiers between the two locations of Snowriver Resort regularly travel past his house and acknowledge the lights.

"They beep every time," he said, chuckling.