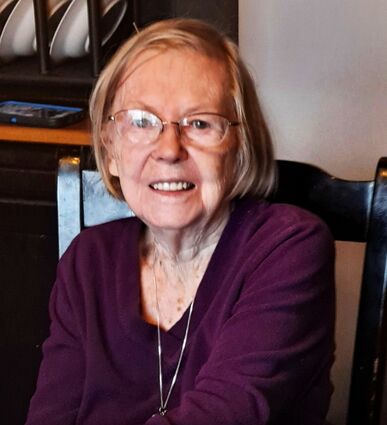 Gwen was born on April 26, 1929, in Duluth, Minnesota, daughter of Clyde and Jane (nee Jones) Holmberg. She was the youngest of four children. Gwen graduated from Luther L. Wright High School in Ironwood, Michigan, with the class of 1947. Gwen married Clarence (Kelly) Leo Swanson on July 8, 1949, in Ironwood.

Gwen had many talents including sewing, knitting, quilting, jewelry making and crafting. She always had numerous projects in the works. She handmade many gifts over the years. Gwen was also a talented baker. Her Christmas cookies were loved by family and friends. She enjoyed time spent in Southern California with her brother, Robert; wintering in Florida with her daughter, Christine; traveling to various locations throughout the United States over the years and the trip of a lifetime exploring the beautiful countryside of Sweden and surrounding countries with her daughters.

Gwen was a dedicated Girl Scout leader for many years and a member of First United Methodist Church in Racine. In recent years she cherished spending time with family and friends, reading many books, attending craft fairs and playing cards. She was a loving wife, daughter, mother, grandmother, great-grandmother, sister, aunt, friend, and so much more. She will forever be remembered for her generosity, kind heart, and beautiful smile.

She was preceded in death by her husband; daughters, Linda Mary Swanson, Kelli Ann Skindzelewski and Christine Rae (Cook) Reinighaus; parents; sisters, Mary and Barbara, and brother, Robert; as well as her brothers- and sisters-in-law.

Funeral services were held on Sunday, Dec. 18, at First United Methodist Church, 745 Main St. in Racine, at 3 p.m. with Rev. Jakes Voker officiating. Relatives and friends gathered at 2 p.m. until the time of service. Gwen will be laid to rest with her beloved husband in Riverside Cemetery in Ironwood at a later date.

Memorials to First United Methodist Church have been suggested.

Maresh-Meredith and Acklam Funeral Home and Crematory of Racine is assisting the family. Please send condolences to meredithfuneralhome.com.