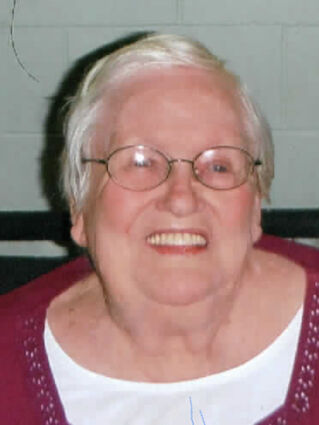 IRONWOOD — Olive Marie Johnson, 91, a resident of Ironwood and the Westgate Nursing Home, passed away peacefully on Dec. 9, 2022. She was daughter of the late August and Edith Swanberg and was born on Aug. 31, 1931.

She was baptized at Salem Lutheran Church in 1946 and attended Newport grade school and graduated from Luther L. Wright High School in Ironwood in 1949.

Her yearbook quote was, “A pleasant combination of a good student, a good sport and a good friend.”

She worked at various jobs as a secretary, clerk and accountant.

On Sept. 10, 1955, she married T/Sgt. Ivar T. Johnson at Salem Lutheran Church. They moved to various military bases and retired to Florida.

In 1984, she returned to Ironwood and, in 1986, attended Gogebic Community College and received a certificate in business and medical transcription.

Inurnment will be at the Riverside Memorial Cemetery. A private memorial service will take place at a later date.

The family would like to extend a special thank you to the staff at the Westgate nursing facility for their diligent care of Marie and her family during the many years.

The family has chosen McKevitt-Patrick Funeral Home of Ironwood to honor Marie's legacy of life. You can leave condolences or a tribute at mckevittpatrickfuneralhome.com.