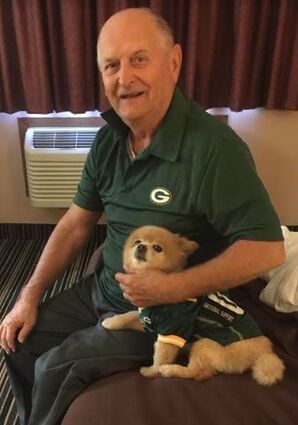 He was born July 30, 1934, to E. Edward and Violet M. Wiita in Iron Belt. He attended Iron Belt schools, graduating from the Iron Belt High School in 1952.

John attended Gogebic Community College for a short time then went off to work for GMAC repossessing cars in Milwaukee. There he met his wife of 63 years, Donna M. Zizzo. In 1959, they were married remaining in the Milwaukee/Kenosha area until 1960 when they came back and built the Badger Motel in Iron Belt.

John then went on to sell insurance for Prudential Insurance in Ironwood during the week. After 10 years with Prudential, working as an insurance agent, of which he received many awards for the number of policies he sold, he went into business for himself. John bought the Prenderville Insurance Agency in Hurley, renaming it the John Wiita Insurance Agency. The agency expanded to five offices during his ownership.

Contributing to the betterment of the community was one of John's many passions. John was one of the main players involved in forming a corporation with stockholders to apply to the Federal government to develop a savings and loan in Hurley. This came about and was very successful. John also became the chairman for the Doctor Recruitment committee that was started to recruit doctors to the area. The committee was part of a Federal government program, through their efforts two doctors were recruited and a clinic was developed. Later, he was also tagged to assist in recruiting dentists for the community. The community still benefits from these efforts. In addition to this, John also sat on the Iron County Board; he was influential in getting Schomberg Park developed per family request. It now has bathroom facilities and electricity, which allows it to be available for campers to the area along with snowmobilers.

The insurance business allotted John some opportunities to assist in educating the children of the Hurley School District. John was able to get brochures from the various insurance companies he championed regarding fire prevention. He went to the schools, provided the teachers with this information so they could instruct the children what to do in case there was a fire in their house, then provided kits with more information to include a coloring sheet on fire prevention. A competition for the best picture was then implemented. These pictures, with no names attached, were posted around town in different businesses and then voted on. The John Wiita Insurance Agency then gave out cash prizes for first, second and third place.

On another occasion, John contacted the insurance companies he worked with to donate money to support a program in the school to provide counseling and assistance to the kids in the high school that were dealing with alcoholism and drug abuse in the family or with themselves. They were able to get counselors in from Minneapolis, who held rallies to support these kids. John received letters later from some of these kids, thanking him for saving their life.

He was preceded in death by his parents; son, John Robert Wiita; his brother and sister-in-law, Clifford and Phyllis Wiita; nephew, Phillip Wiita; and his furry little companion, Sammy.

The family requests no flowers, condolences can be sent to: Donna Wiita, 363 Preston I, Boca Raton, FL 33434.

As per John's request, cremation has been completed. A celebration of life will be upcoming in the spring with final internment at Hillside Cemetery in Iron Belt.

The McKevitt-Patrick Funeral Home in Ironwood has been chosen to honor John's legacy of life. To make an online condolence or for more information visit McKevittPatrickFuneralHome.com.