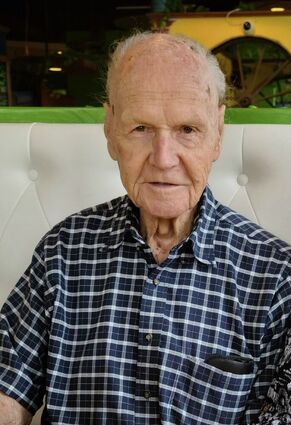 John was born Aug. 9, 1931, son of Edwin and Florence (Olson) Mattson. He grew up and attended schools in Iron Belt, Wisconsin. After graduating, he completed his education in electrical appliances and TV mechanics in Louisville, Kentucky. He then moved to Chicago to work for the Zenith company.

John married Geraldine "Gerri" L. Baron on Feb. 18, 1957. They made their home in Ironwood, Michigan, where they spent most of their 66 years together, raising three children and actively attending Zion Lutheran Church.

John continued his career working for Ironwood Fuel and Appliance, but achieved a dream when he bought the business in 1962 and opened it as Mattson's TV and Appliance. In 1977, John and Gerri designed and built The Towne House Motor Inn, which became a favorite local restaurant and lounge.

One of John's passions was finding damaged vehicles and restoring them, often making them their own. Finding potential vehicles actually prompted him to learn how to search on the internet! He also was quite skilled as a carpenter, as he built two homes and many special furniture pieces for family. He was the first person many people would call to help with a home project.

In his earlier years, John enjoyed spending time with family and friends whether at home, the cottage or boating on nearby lakes. With friends he and Gerri often went snowmobiling or cross country skiing in the winter and honing his skills on the golf course in warmer months. John had a close relationship with his brother and sisters, and at any time loved talking about the good old "Iron Belt Days."

Several years ago, John and Gerri sold the family home and moved to Appleton, Wisconsin, where some of their family lived nearby. In 2021, they moved to Ocala, to enjoy warmer weather. John's favorite room was his screened in lanai; it was never too hot for him!

Anyone who knew John seemed to admire his kind and approachable presence and many respected him for his many accomplishments. He was always there for family, friends and especially loved time with his grandchildren and great-grandchildren. He was a great listener and enjoyed making people laugh.

A private memorial service will be held in Ocala through Baldwin Cremation & Mortuary Services.