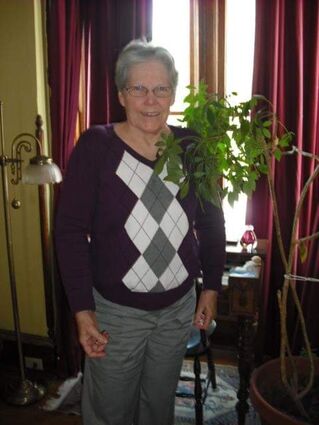 Her paternal great-great-grandfather was Curtis Brigham, a privateer out of Boston, Massachusetts, during the War of 1812. He came to Michigan in 1833 and was one of the first settlers in Gun Plain Township, Allegan County.

In 1935, Margaret's parents moved to Union City, Calhoun County, where her father worked as a machinist and her mother taught first grade. Margaret played trumpet in the high school band and graduated second in her class at Union City High School.

Margaret then went to the Presbyterian Hospital School of Nursing in Chicago. There she met her future husband, Roger Lackman, a mathematics major at Roosevelt University. After she graduated, they married and moved to Michigan where she worked as a nurse while Roger studied civil engineering at Michigan State University.

After Roger graduated, he found an engineering position for Standard Oil in Hammond, Indiana. Both were blessed with an adventurous spirit and in 1960 they moved to Washington state where Roger started work for Boeing and helped design the Boeing 707. From then on Roger moved every several years finding new jobs in engineering and more skills everywhere he went. Margaret would find nursing jobs when they moved and she became a better nurse the same way. Over the years, they lived in Ketchikan, Alaska, where Roger was the city engineer; Fairbanks, Alaska; and Kodiak, Alaska; Aberdeen, Washington; Clarkston in Asotin County, Washington, where Roger was the county engineer; Aberdeen, South Dakota; and Mount Lebanon, outside Pittsburgh, Pennsylvania.

They moved to Bessemer in 1999 to live near their son, Mark, and his family. When Roger became ill with Parkinson's disease, Margaret was able to nurse him so well that he was able to stay out of a nursing home.

Margaret was very creative and loved making quilts, stained glass and other artistic endeavors. In her later years, she discovered a skill in drawing that she never knew she had. She loved her pet dogs and cats and took very good care of them. She was a member of Sharon Lutheran Church, Bessemer. She will be missed.

She was predeceased by her parents; her husband, Roger, on Dec. 6, 2015; two brothers, Dexter and Robert Brigham; and a dear friend and sister-in-law, Robert's wife, Mary Brigham.

A memorial service will be held Saturday, Jan. 21, at 1 p.m., preceded by visitation at noon, at Sharon Lutheran Church, 100 E. Sellar St., Bessemer, with refreshments following the service. Spring burial will be in Hillcrest Cemetery, Bessemer.

Jerald Rocco, owner and manager of Lakeside Memorial Chapel Inc., Wakefield, is assisting the family. To send online condolences or to share a memory, please go to lakesidememorialchapel.com.