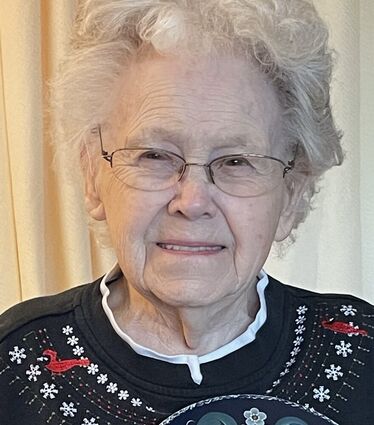 IRONWOOD TOWNSHIP, Mich. - Anna M. Olson, 96, of Ironwood Township, passed peacefully at Villa Maria Nursing Home in Hurley, Wisconsin, on Jan. 19, 2023, where she had resided for the past 14 months.

Anna was born Oct. 23, 1926, in Ironwood, the daughter of Andrew Joseph Rye Jr. and Anna LeGeault Rye. Anna was a proud graduate of St. Ambrose schools. She then worked for an Ironwood bank before marrying her husband, the late Donald E. Olson, on June 23, 1945.

Anna and Don built a home on Olson Road, where they raised nine children.

Anna was a proficient homemaker. She was very organized and ran a clean and orderly house. The savory aroma of homemade bread, pies, and cinnamon rolls often filled the air. The bounty of the gardens and wild fruits were enjoyed all winter because of her diligence in canning or freezing the gifts of the earth all summer long. Anna showed love by always having fresh and hot meals for the many people living in or visiting her home.

Anna was an avid reader and enjoyed crossword puzzles and Scrabble. But her real forte was "shooting the moon" and bidding crazily in a card game called "Smear." Her opponents would be amazed at her guts to take chances and exasperated by her endless luck.

Later in life, Anna learned the Norwegian art of rosemaling and artfully painted the many wooden objects that adorned her home, many of which were made by her husband. Lucky children and grandchildren have received such items, which will be lovingly cherished. For more than 30 years this artist lived with the slowly declining vision from macular degeneration. Anna resigned herself to becoming legally blind and eventually couldn't paint or read anymore. Anna never complained about her inability to perform her favorite pastimes, although she missed them immensely.