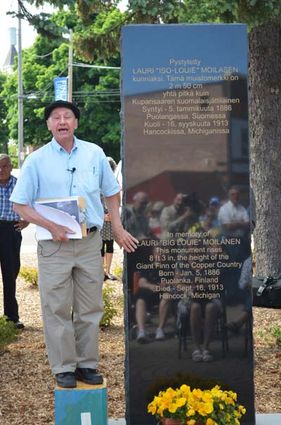 In a Wednesday photo, Dana Richter, one of the organizers of the effort to create a monument to “Big Louie” Moilanen, stands next to the final product during a dedication ceremony at the Finnish American Heritage Center in Hancock.

HANCOCK (AP) — A big man in Hancock history has a new honor in his Upper Peninsula hometown.

The Daily Mining Gazette of Houghton says a monument to “Big Louie” Moilanen was unveiled Wednesday on the first day of FinnFest.

The statute stands 8-feet-3-inches tall, which was said to be Moilanen’s height. It’s near the entrance to the Finnish American Heritage Center.

Dana Richter organized efforts to raise money to build the monument. He says Moilanen was born in Finland and immigrated to the U.S. when he was 4. Moilanen died in 1913.

Richter says Moilanen grew up on the family farm in Salo. He worked as a farmer, miner, justice of the peace, saloon keeper and circus “freak.”