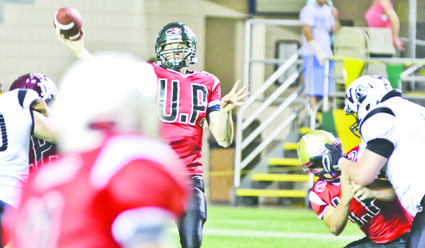 MARQUETTE — Saturday wasn’t much of a day for offense, but Gogebic Miners’ quarterback Eric Lane helped account for one of West’s touchdowns.

Seven local players took part in the U.P. Football All-Star Game at the Superior Dome in Marquette Saturday. The East lost its 19-0 lead, but held on for a 19-13 victory.

The East scored the game’s first three touchdowns, two in the first quarter and one in the third.

The West finally got on the scoreboard when Lane threw a 26-yard TD pass to Norway’s John Grayvold Jr. with 2:44 left in the third quarter. Grayvold somehow got a handle on it after appearing to bobble it first. An East defender was draped on his left side and lunged for the ball, missing and allowing Grayvold a path to the endzone.

“It wasn’t that good of a throw, but John Grayvold is a really good receiver,” Lane said. “He just kept his eye on it and he pulled it out.”

Their Dads graduated together in Wakefield, Eric said.

“It’s nice to finally play with him,” Lane said.

“It was great to see that from a Miner,” Smith said.

Jared Rivard of Menominee was the West Offensive MVP. He caught a 45-yard touchdown pass in the fourth quarter to pull the West within a touchdown. Dillion Hanchek (North Central) was the Defensive MVP.

The West drove 50 yards on the arm of Stephenson quarterback Aaron Grinsteiner in the final drive of the day when the West got the ball back with 2:27 left after the East missed a field goal.

East Defensive MVP Curtis St. Louis of St. Ignace intercepted a pass with 25 seconds left to seal the game. It was his second pick of the game.

Sault Ste. Marie’s Ray’shon Anderson was East Offensive MVP. He caught a 95-yard touchdown pass to put the East up 12-0 in the first quarter. He finished with 150 yards.

Local players also had a day to remember.

Gogebic’s Samm Lehmann got to the quarterback consistently, picking up where he left off for the Miners despite going up against an All-Star offensive line.

“Those linemen were big, but I was able to get around them a good amount of time,” he said. “I wish I could have played more, but it was fun.”

Lane said, “He’s a beast on defense. Even though he’s small in size, he just gets after it.”

Lehmann was a nose guard for Gogebic, but he moved to tackle Saturday.

“It was a dream come true,” Lehmann said. “I’m so happy to be here with a bunch of great guys, every one of them. I’m so happy I got to meet all of them. This week was one of the best weeks of my life, even though the score was not in our favor.”

For Lane and Smith, football made for two all-star weekends. Both played for the victorious North basketball all-stars in St. Ignace on June 22.

“It was a week long thing and the camaraderie we made,” Smith said. “We came in not knowing hardly anybody. By the end of the week, we were all messing with each other, having a good time. It was like we knew each other for years. It was a great experience.”

Ironwood’s Brian Heckathorn played at defensive tackle and picked up a couple of tackles.

“Best experience of my life, probably,” he said. “I got to meet a lot of new people, great football players, great people.”