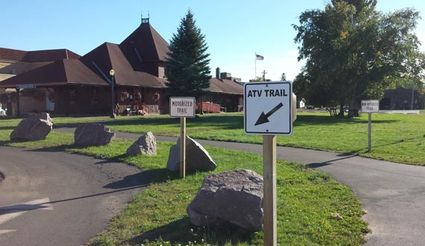 MICHIGAN'S DEPARTMENT of Natural Resources is seeking names for the state's trail that runs from Belle Isle Park in Detroit to Ironwood, a portion of which is shown above at the Old Depot park in downtown Ironwood.

Individuals with a knack for names have a chance to suggest an official name for Michigan's statewide biking/hiking trail that stretches 900 miles from Ironwood to Belle Isle Park in Detroit through a contest of the state's Department of Natural Resources.

"This contest is a fun, inclusive opportunity for people to share their creativity, draw on their passion for our state's trails and be involved in celebrating a milestone accomplishment for Michigan's outdoor recreation," Ron Olson, chief of the DNR Parks and Recreation Division, said in a news release.

Name suggestions will be accepted through Oct. 13 and submissions will be judged on creativity, originality and ability to capture the overall character of Michigan, Olson said.

Submissions should also portray the concept of connection, since the trail will link several existing trails and communities in a way that best showcases Michigan's natural and cultural resources, the release states.

The contest winner will be offered a choice of several vacation prize packages at locations along the trail, which include:

-The Henry Ford Museum and Westin Book Cadillac in Detroit.

-The Grand Hotel on Mackinac Island.

Runners-up may also be selected to win the prizes.

According to the release, Michigan has the most rail-trail miles of any state and more than 12,000 miles of recreational trails serving a variety of users.

"This new trail will further enhance Michigan's reputation as a recreation leader, strengthen connections among communities, and provide new economic opportunities for businesses along the route," the release states.

Representatives of the partner organizations will judge the contest entries and the official name will be announced in early December.

If multiple people submit the same winning name, a single winner will be randomly chosen from those entries.

"This trail will encourage and make it easier for Michigan residents and visitors to experience even more great places in our state," Olson said. "We're excited to see the economic, health, social and transportation benefits this trail will ultimately provide for communities and individuals all over Michigan."

People are asked to submit their ideas online at surveymonkey.com/s/namethetrail, through Facebook at facebook.com/midnr, or by mailing a paper entry form, which is available at michigan.gov/dnrtrails and clicking "name the trail."

For more information on the trail and other recreation trails, visit michigan.gov/dnrtrails.