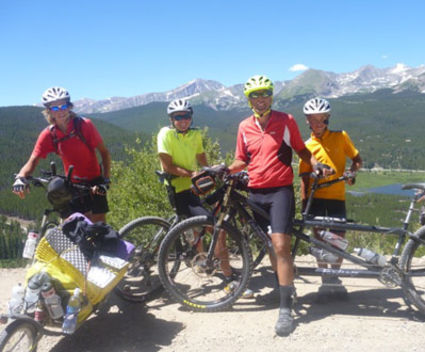 JOE BODEWES, of Hazelhurst, Wis., and his sons, Will, 17; Luke, 15, and Noah, 13, pause during their bicycle trip along the Continental Divide this summer.

In 2011, the family paddled 1,600 miles around Lake Superior in 72 days, finishing at Black River Harbor, north of Ironwood. They raised money for HIV-positive children in Tanzania.

This summer, the challenge moved out West as the family successfully tackled a 2,500-mile bicycle trip across America.

They planned on a 55-day journey, but finished in 47 days on Aug. 6, riding along the Continental Divide from Roosville, Mont., to Antelope Wells, New Mexico.

As a result, Will Bodewes, 17; Luke Bodewes, 15, and Noah Bodewes, 13, have become among the youngest riders to complete the route.

"We finished in great shape and never had to use the first aid kit once," said Joe Bodewes, a veterinarian.

The Great Divide Route travels through Montana, Idaho, Wyoming, Colorado and New Mexico, with more than 200,000 feet of elevation changes along the way.

"There were a few scary minutes, one of which was when Luke hit a hole going down a steep descent and flipped over his handlebars. He was badly bruised and blew out the seals on his front forks, but he was able to keep riding," Joe Bodewes said.

Mom Molly Bodewes rode the first 440 miles in Montana, where they had to push and carry their bikes through deep snow and over downed trees while avoiding grizzly bears.

Father Joe took over in Butte, Mont., and rode the remaining 2,060 miles, as was the pre-ride plan.

It wasn't a smooth ride.

Long stretches of more than 100 miles without water were common in the deserts of Wyoming and New Mexico and deep mud forced them to push and drag their bikes for miles in New Mexico. Much of the trail was off-road.

On one stretch, they had been out of food for most of the day and when they finally made it to a town after 10 p.m., they found a Taco Bell, where the boys astonished the staff by ordering and eating 26 burritos.

Molly Bodewes estimated that they averaged eating up to 7,000 calories a day. The group would consume about 25 packets of instant oatmeal, 12 bagels, a pound of peanut butter, 15 candy bars and 16 or more servings of macaroni and cheese, in addition to eight gallons of water, on a daily basis.

They saw road runners, antelope and horned toads in the southern part of the trip.

"We all became good bike mechanics, as it was often up to 900 miles between bike shops. The rough trail conditions resulted in numerous breakdowns, including 11 blown tires, two broken chains, worn-out brakes and bikes that wouldn't change gears," Joe Bodewes said.

There are no plans yet for the next Bodewes summer vacation, but the two older boys, Will and Luke, have hinted they would like to go back and race the route, their father said.

In the second weekend of June every year, a group of the top 100 riders from around the world converges to race the route north to south. It is totally unsponsored and is billed as one of the toughest endurance races in the world, with the top riders finishing in under 15 days.