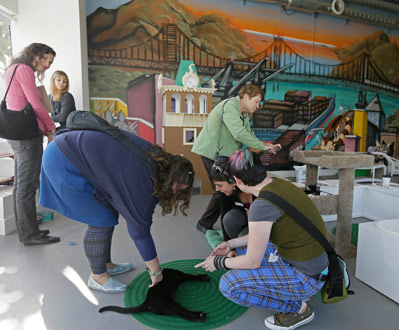 IN THIS photo taken Thursday, a number of women play and photograph cats at the Cat Town Cafe in Oakland, Calif. Following similar cafe concepts in Asia and Europe, the cafe has become America's first permanent feline-friendly coffee shop. Cafe customers pay to pet cute kitties while sipping on tea or expresso drinks. It allows customers who may not be able to have cats in their own homes to enjoy the benefits of furry friends for short times. without the responsibility. The animals come from a partnership with a local animal shelter and are also available for adoption. This may just be the beginning of this country's cat cafe craze as others plan on opening soon in Seattle, Portland, San Diego and Denver.

OAKLAND, Calif. (AP) - Cat lovers in Northern California are pouncing at the chance of spending time with feline company at a new cat cafe in Oakland.

Cat Town Cafe is giving dozens of visitors a chance to mingle with furry friends while sipping coffee and nibbling on cat-themed cookies.

The cafe opened last month and has been full since opening day.

It was inspired by the cat cafe craze in Japan, where many people live in cramped high-rise apartments that don't allow pets.

While making feline friends became popular therapy for lonely or anxious workers in Japan, the Oakland coffee shop puts the focus on the animals.

The tuxedo, orange tabby and Siamese cats napping or stretching in the sun in Cat Town come from a local shelter and are available for adoption.

"Most of them have been at the shelter for four months or more. So as much as this is a super fun experience, it's really a mission-driven project to get the cats out of the shelter and into great homes," said Ann Dunn, founder of Cat Town Oakland, a nonprofit group that helps place cats least likely to be adopted from the Oakland Animal Shelter.

She said there were 14 adoptions in their first 12 days.

For a $10 donation to the organization, visitors get one hour of kitty company in the cafe, where they can play with felines, scratch their backs and watch them nap.

Each person is given a designated window of time to make sure there are not too many people at once in the room painted with cartoon-like, bright murals of cats.

Cat naps are very popular at the cafe, but Christina Souza, who visited on a recent afternoon, didn't seem to mind.

"I think it's fun. It's great. It's exciting," Souza said. "Why not have more venues where cats can let out their fun personalities?"

Cat cafes are now open in London, Vienna and Paris, and Cat Town's founders believe their coffee shop is the first of its kind in the United States. That may change soon - a half dozen cat cafes are set to open in the U.S. next year, most of them along the West Coast.