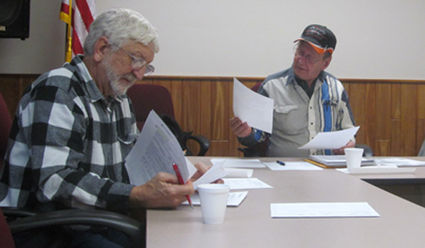 JOE PINARDI, Iron County Board of Supervisors chairman, and Bill Thomas, supervisor from Gile, look over bills during a finance committee meeting Thursday.

Zoning administrator Tom Bergman discussed imaging, saying it is part of a consortium effort in northern Wisconsin. The plan is a for a plane to fly over using orthophotography, which uses lasers to measure the exact contours of the surface below.

A similar program was used a few years ago, with pictometry software. According to Bergman, the software is "great technology," and can be used for a variety of reasons, including forestry, damage assessment and re-evaluating flood plains.

Because multiple counties are participating in the project, the overall cost is decreased, an advantage for Iron County.

"Normally, we wouldn't be able to do this, because the price is so high," he said. "This allows us to have reduced costs because of the number of partners involved."

According to Bergman, the first year of the project in 2015 will cost around $108,000. Bergman said $67,000 would be covered under a grant, $21,000 would come from retaining fees throughout the year through the register of deeds office and $20,000 is budgeted in preparation for the project.

Despite the hefty bill, Bergman said the budget for the information technology budget will be going down "around $20,000 to $30,000," and wanted to know if the extra funding could be rolled over to the project.

Also, because of additional investors, the $40,000 fee may decrease.

The contract will be signed very soon, and the committee decided to allow Bergman to move forward with the project.

"Once the contract is signed, we're committed," he said.

Nasi spoke to a company tht will get proposals from other contractors.

Fifty-one locks need to be replaced, with an estimated cost of $30,000.

"They are just wore out," Nasi said. "They are high-security locks that are used every hour to check on inmates."

The locks have been worked on, but Furyk said the cost of fixing them will "nickle and dime you to death."

Nasi hopes to have prices within the next couple of weeks.

Carolyn Kolson-Janov, director of Iron County Human Services Department, asked the committee to approve a pay raise for two employees, and change the title of one of the employees.

"We cannot afford to lose these employees," Kolson-Janov said. "They have vital information regarding our complex systems of funding."

The committee approved the request.

Committee members also approved expanding the courthouse cleaning position from 20 to 30 hours per week. The employee will also clean the highway/forestry building, human services and sheriff's department, in addition to the courthouse.