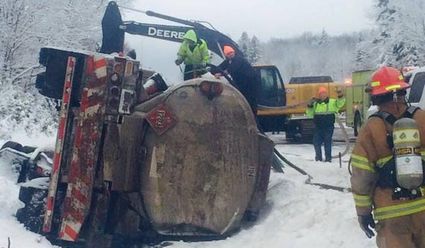 THIS PHOTO, courtesy of Ironwood Public Safety Department fire officer Brandon Snyder, shows a tanker on its side, while workers try to pump fuel into another tanker Wednesday near Watersmeet on U.S. 2. Members of the IPSD hazardous materials team responded to the scene, marking the first time the team used its equipment.

WATERSMEET - The Ironwood Public Safety Department hazardous materials team broke in equipment for the first time on Wednesday during a semi tractor and trailer accident on U.S. 2 in Watersmeet.

Since first receiving the equipment in January, the team hadn't used it yet.

"We always hope that we never have to use it," fire officer Brandon Snyder said. "But, we are prepared if we need to."

In an accident on black ice, a tanker became detached from the tractor and was punctured, leaking fuel onto the highway. The HAZMAT team's job was to patch a hole in the leaking compartment, using a specialized product. Once patched, clean-up efforts began to help stop any potential environmental damage.

According to Snyder, the compartment that needed patching contained about 1,700 gallons. The entire tanker held more than 7,000 gallons, but only the one compartment was compromised.

A Krist Oil response team also responded to the scene and pumped the remaining fuel into another tanker and assisted in the clean-up effort.

The highway was closed until 5 p.m. on Wednesday, with many vehicles being re-routed onto U.S. 45 North, then M-141 South in Covington to Crystal Falls.

IPSD's hazmat team consists of 11 members and has been assigned to cover the entire Upper Peninsula.

"Everything went well," Snyder said of the team's response. "Our guys did exactly what they were trained to do."

The IPSD received well over $1 million in equipment to become a hazmat response team, including a vehicle, air sampling and monitoring equipment, protective gear and decontamination equipment.

Funding was provided federally by the Region 8 (U.P.) Homeland Security Board.

Hazardous materials response teams previously had to come from at least eight hours away to reach Gogebic County.

With U.S. 2, M-28 and U.S. 41 being major highways with trucks crossing the U.P., some headed for Canada, "there is a high volume of hazardous materials that pass through our area at any given time," IPSD Director Andrew DiGiorgio said earlier this year.

The hazmat team came at no cost to the city.