IRONWOOD --- The Samsons hope they haven't seen the last of the Lindquist Center this season.

To play here again, the Samsons have to win in St. Paul on Feb. 25, against Dakota County Technical College in the NJCAA Division II Region 13 opener. The winner of that game hosts the region final that weekend.

"I like our chances; obviously we have to play well and they're a good team and they beat us twice already," GCC coach Dennis Mackey said. "I like our team. I like what we do. We haven't always played well throughout the season. Right now, we have 17 wins and I'm pleased with that.

"We've had a good following all year and we're hoping we can come back home in March and get the tournament run going at GCC, too."

On Saturday, Gogebic expanded the lead, to as big as 23 points, 64-41. Fox Valley ate into that deficit, but it was too big to tackle fully.

"We talked about the fact that our energy level can't subside just because we're up 12," Mackey said. "As the game went on, as we got the big lead, and they hit some 3s and got it back to a manageable 10, 12 points at the end, with the 3-point game, you cannot, cannot relax. The other team gets hot, you got a lead of 10, 12 points, they hit two, three 3s, all of a sudden it's a two possession, one possession game again.

"I thought we played pretty solid defense for the most part. We kept the pressure on, we played a three-quarter court press pretty much the whole game, not necessarily a hard press, but just to be in position to make them handle the ball and work the clock down in the backcourt and then take our chances in the frontcourt."

LaDell Hickman started the second half right for GCC with back-to-back 3s, giving GCC a 47-32 advantage. He was 0 for 4 behind the arc with no points in the first half.

"It was huge," Mackey said. "Part of it might have been they knew he didn't make shots. We had the set play where he was coming off the screen. I told him he's got to hit a couple just to get the defense drawn out on him. They were obviously aware of Adam (Mackey); they were going to try to deny him, he had a big first half (13 points). LaDell, that's his time where he needs to step up."

Hickman also hit a runner in the lane that put GCC up 49-35. He had eight points in just a few minutes to start the half.

"That really gave us a little bit of breathing room and it gave him some confidence, too," Mackey said. "No matter how much you score, you go through little funks during games or during the year where you're not scoring a lot and you're hesitant to take shots. Big for LaDell, big for us."

Mackey led Gogebic with 20 points and eight rebounds. He was 4 of 5 from behind the arc. Collin Miller scored 13, Michael Harris had 12 and Hickman finished with 10. 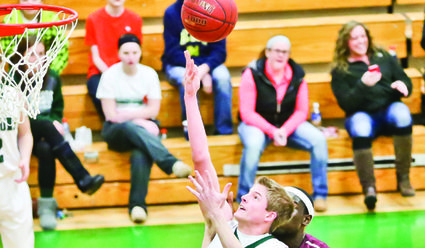 GOGEBIC COMMUNITY College's Bryant Rowe goes to the basket during Saturday's game against Fox Valley Tech at the Lindquist Center in Ironwood.

"Collin ran the floor, he's just so active," Mackey said. "LaDell had a nice game. Harris got to the rim; his outside shot has been a little out of sync of late, but he's been getting to the rim. He's so athletic, I'm encouraging him to that, one, to draw fouls because he's a good free throw shooter and two, it draws the defense and opens other guys up."

GCC (17-12) goes to Finlandia University in Hancock Wednesday for a 6:30 p.m. game that completes the Samsons' regular season.