No drama in round two: Lady Samsons lose by 17 at Finlandia 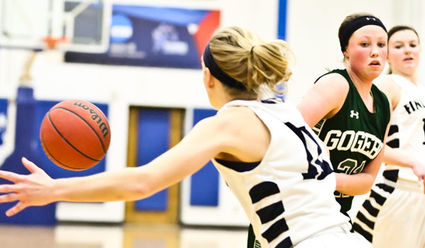 HANCOCK - The sequel didn't pack the same drama as the first meeting.

It was nowhere near as exciting as when the teams met in Ironwood. Sam Ofstad's 3-pointer before the buzzer won that game 69-66 for the Lady Samsons.

Instead the tone was set right off the bat Wednesday when Gogebic started the game with four straight turnovers and Finlandia took an 8-0 lead.

"It was almost like that heavyweight boxer coming out of the corner and getting hit right away and then is on his heels the rest of the round, that's where we were," GCC coach Mark Movrich said. "I thought they came out with much more energy than we did. It seemed like we were always playing catchup and we were never quite able to catch up. We closed the gap a few times, but they made plays when they needed to. "

Gogebic battled foul trouble and was outrebounded 52-32. The Lady Samsons pulled within six points twice in the second half just to watch Finlandia pull away again.

In Ironwood, Gogebic jumped out to an 11-0 lead, while Finlandia turned the tables in Hancock with its good start.

"We came out, got a little lead, scored right away, got a couple stops, got them out of rhythm and they had a couple turnovers," said Finlandia coach Terry Klemett, who played for the Samsons in the mid-1990s. "We were able to build off that."

GCC was coming of its best practice of the year Tuesday and had played FInlandia so well the last time. But the Lady Lions had the upper hand this time.

"I just thought we would be ready to play this with them being a U.P. rival," Movrich said. "We just came out flat-footed and Finlandia looked to exact a little revenge from their trip to Ironwood."

"We knew she was going to get her points," Movrich said. "I just thought overall we didn't do a good job on the other players. The other players were able to get their points also. When they came down to Gogebic, I thought it was pretty much Marissa got hers and we did a good job containing everybody else."

Klemett called her "one of the best ever in the program."

Julia Daavettila had a double-double, scoring 14 points and grabbing 14 rebounds. Daavettila, one of Finlandia's best freshman, had been out since December with an injury.

"That's great for us because it helps release some stress on Marissa Burke," Klemett said. "I ask Marissa to do a lot of stuff, but she's getting double and triple teamed a lot."

"She was great last time. She was good tonight, but I think we made her work a little bit harder for her shots," Klemett said.

GCC (20-6) is off until the NJCAA Division II Region 13 final set for the Lindquist Center on Sunday, March 1 at 2 p.m. The Lady Samsons will play the winner of the only semifinal, United Tribes vs. favored Dakota College at Bottineau.

A week and a half off is the last thing Gogebic needs, Movrich said.

"We need to get back on the court and gain some confidence, but it is what it is and we're going to make the best of it," Movrich said. "We put together strings of good, intense play, but it takes 40 minutes of that to win a championship."