Community turns out to give opinions on future of Ontonagon waterfront 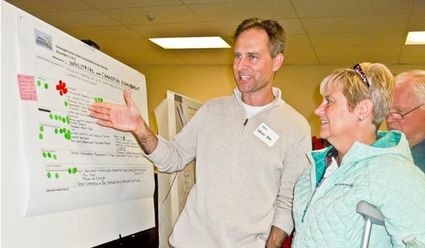 DON CARPENTER, lead facilitator for the Ontonagon Waterfront study, shows one of the three plans for waterfront viability to Sue Preiss, Ontonagon Economic Development Corporation, on Friday. The cluster of red dots on a portion of the map indicates people who "cannot live with" the option of using the shipyard property for industry.

ONTONAGON - Large crowds returned Friday to the Michigan Works Building to vote on specific planning options for the Ontonagon waterfront which were identified at a public meeting Thursday.

Participants viewed three mapped options and were given a large green circle for the best liked plan, smaller circles for somewhat liked features and a red circle for a proposal "they could not live with." Anyone using the red veto had to explain why he or she could not live with that option, Don Carpenter said.

Carpenter, from Lawrence Technical University, which is the prime facilitator for the project, said all three proposals have one thing in common.

In addition, specific items appeared in each of the three proposals, including an historic fishing village on Rose Island and connecting bike and non-motorized trails.

On Friday, in the first hour of the two-hour touring of the conceptuals by the public, one proposal received an abundance of red dots. That proposal was to keep the shipyard area as industrial. Other maps proposed that area for condominiums, open beaches and-or retail operations.

One of the popular listed proposals included a connection between the marina and Ontonagon business community.

Carpenter said his team will take the data from Friday's work session and boil that down into one proposal. Viewing of that map will be held from 6 to 8 p.m. today at the Michigan Works building.

Carpenter said he and the rest of the team were "very pleased with the reception we have received."

He said with the four communities that are part of the study, only Ontonagon has had "so much media attention and able to reach and engage large segments of the population."