Cardinals improve to 5-1 with victory over Red Devils 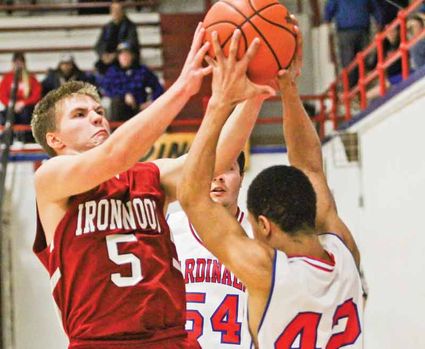 WAKEFIELD - Wakefield-Marenisco is showing signs it will be a team to be reckoned with in the 2015-16 season.

The Cardinals played another good game in defeating Ironwood 71-49 in a non-conference battle before a good-sized crowd in the Cardinal Gym on Friday night.

"They're good," Ironwood coach Pete Lewinski said. "They're a much better defensive team and improving on D. They always had high-powered offensive play and now they've become more balanced on offense and defense. They have the combination of high-powered scoring with pressure defense and a press that compliments all of it. It gave us too many turnovers. It hasn't surprised me that we've played some pretty good basketball so far, but it surprised me we didn't give them a better game."

Cardinal coach Terry Fetters said he isn't surprised his team has started out with a 5-1 record.

"I knew we would be be competitive, have talent, leadership and we figured we'd be here," Fetters said.

"Our offense on the floor has always had the ability to score. It's the defense that's impressed me. We've spent a lot more time on defense. I told the guys the other night that we can talk a lot about defense, but we've got to do it. If you don't want to do it, let others step up. We just have to keep playing as a team, keep it up and we'll do well."

It's nice to get a win over Ironwood. They've been so strong. Coach Lewinski is a heck of a coach. He's coached them very well with no big guys."

W-Ms Collin Gagnon led all scorers with 22-points and he said this was the best W-M team he has played on in his four years on varsity.

"We're playing as one," Gagnon said. "I was very satisfied with our team play tonight. The intensity we played with on defense helps us come together on offense."

W-M showed it was ready to go when it jumped out to an early 7-0 lead on baskets by Jacob Suzik and a 3 from the left corner by Nick Tarro.

But Ironwood's Luke Hewitt drained a triple at the 4:41 mark and a baseline drive by Ryan Sobolewski whittled at the lead. And when Hewitt was fouled on a drive and sank two free throws, Ironwood pulled within 12-11.

Gagnon followed with a deep 3 from the right side and Jacob Franklin rattled in a triple off the glass at the buzzer and W-M won the first quarter, 20-11.

In the second quarter, the Cardinals attacked with its full-court pressure and the Red Devil shooting went cold. Ironwood went without scoring until the 3:16 mark and the Cardinals out-scored the Devils 10-5 in the quarter and went into half-time leading 30-16.

Hewitt started the third quarter with a 3 from-the-top-of the-key, but Gagnon, Tommy Libertoski and Suzik answered back with scores and W-M took a 38-23 advantage.

W-M kept rolling and took a 52-30 lead after three quarters.

Both teams subbed liberally early in the fourth quarter, but when Ironwood's Zach Combs scored on a hard drive to the basket, the game tightened up to 53-40 with 6:01 left.

So maybe the game wasn't over, yet..

But the Cardinals responded and the lead ballooned to 65-44.

Lewinski was pleased with the play of three players.

"Zach Combs is one tough kid and has no quit," Lewinski said. "Luke (Hewitt) is real good with our ball-handlimg and scoring (14 points). And Ryan Sobolewski has had two good games in a row."

Ironwood (3-3) travels to Mellen on Monday in Indianhead Conference action on Monday at 7:15 p.m., hosts Bessemer on Tuesday and Mercer on Thursday.

The Cardinals (5-1) are on the road to Ontonagon for a Copper Mountain Conference game on Monday.