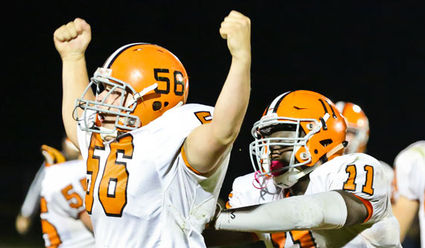 Hurley defensive tackle Mitchell Hissa, left, celebrates a tackle for loss in the fourth quarter with a friendling push from teammate Tandrell Foster during the fourth quarter of Friday night's West-PAC game at L'Anse. The fourth down play came on 4th and 1 and Hissa dropped the L'Anse player for a loss of two, and the play essentially sealed the game for Hurley.

L'ANSE - Hurley defensive tackle Mitchell Hissa felt a lot better in the second half when he switched from drinking water that didn't agree with him to Gatorade.

Everybody on the Hurley sideline felt better in the second half as the Midgets averted L'Anse's upset attempt by keeping the Hornets off the board after the break.

The Midgets defeated the Purple Hornets 40-20 and qualified for the WIAA playoffs for the 19th consecutive year.

Hurley trailed much of the first half and entered halftime down 20-12 as L'Anse scored a touchdown with no time on the clock.

But the Purple Hornets turned i...