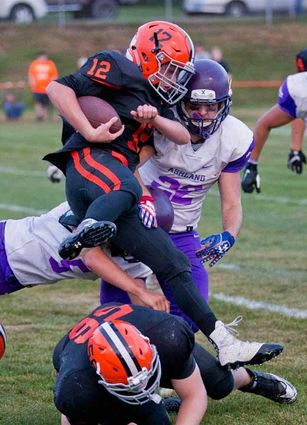 Hurley's Corbin Taylor (12) battles for yardage on fourth down in the first half of Friday night's game against Ashland at Veterans Memorial Field in Hurley.

HURLEY - A one-score deficit might have been no problem. Even having two-touchdowns to make up in the second half would have been manageable.

Especially not the way Ashland got the halftime lead to 24-0.

Hurley failed to score on fourth down inside the 5 to pull within a single touchdown and Ashland followed with a 94-yard drive that ended in a touchdown just before the half.

"That was killer," Hurley coach Scott Erickson said. "We were playing so good defensively out there, making their option reads tough. And we made som...