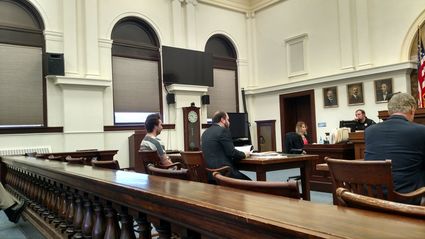 BRANDON BIBLE, left, sits with his attorney, Doug Muskett, in Gogebic County Circuit Court Tuesday during his sentencing hearing. Bible was sentenced to almost 8 years in prison for bringing heroin into Gogebic County.

BESSEMER - A Minneapolis man charged with bringing heroin into the area was sentenced to prison in Gogebic County Circuit Court Tuesday.

Brandon Lee Bible, 36, was sentenced to at least 7 years, 11 months for possession of heroin with intent to deliver and at least 2 years for resisting and obstructing a police officer.

"You took it upon yourself to supply heroin to Gogebic County on not just one occasion, on not just two occasions, but (on) at least three occasions you travelled from Duluth to this county to supply not just a little heroin, bu...