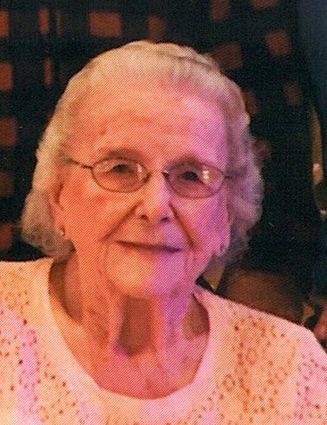 Gloria was born to Woodward and Goldie Gray on July 27, 1927 in Bessemer.

She graduated from Bessemer High School with the class of 1945 at the age of 17 with high honors and the Milwaukee School of Business at age 19 with an Associate Degree in Business.

Gloria worked for the Western New Mexico Telephone Company until the couple relocated to Caspian when Don was hired by the Stambaugh School District as a teacher and coach. They celebrated their 59th wedding anniversary in 2005. Don and Gloria were an inseparable couple whose marriage was filled with laughter and love. Don passed away in March of 2006.

Gloria mastered many skills as a tireless wife, mother, and homemaker. Her homemade bread was a treasured gift of visitors and neighbors. Her culinary skills often brought recipe requests and additions to the dinner table. Her handmade sweaters, mittens, and afghans were the thoughtful gifts to many for special occasions and holidays. Gloria's dish towels and scrubbers were top sellers at Winks Woods, the local and internet retailer owned by her nephew, Walter Winkowski. Gloria's hobbies along with her family were always giving her total love and dedication.

Gloria is preceded in death by her brothers, Walter, Woodward, and Donald Gray; sisters, Mary Louise, Kay, and Betty, and by son Timothy (Jude) of Houston in 2018.

Private family services will be held.

Condolences may be expressed to the family of Gloria L. Elliott online at jacobsfuneralhomeir.com