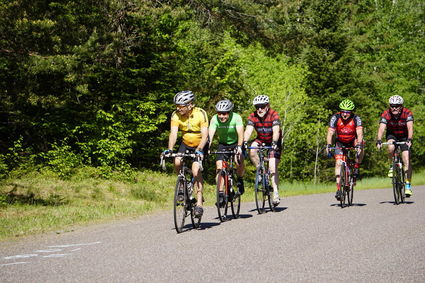 MERCER, Wis. — Participants of the 13th annual Mercer Lupine Junefest said warm weather and sunshine made for a great event — even if the lupine were not yet in bloom.

“This is our seventh year doing it,” said Gail Ondresky, of Mercer.

Ondresky completed the shorter 10 mile ride with her 4-year-old grandson in a tandem seat and a 6-year-old granddaughter was made the ride all on her own. Other riders opted for the 28 mile and 50 mile tours.

“It’s just tremendous,” Ondresky said. “Today was a beautiful day and you could hear the birds and the wind, and even though there are a lot of mosquitos this time of the year because there was a gentle wind there were no mosquitos bothering us.”

Ondresky said Mercer is able to support a bike ride like this because the community is either volunteering to run it or coming out to participate in the activities.

Woods and Blooms Garden Club President Hedda Patzke, said the late winter delayed the lupine bloom this year. There were a few areas where lupine was blooming near Oxbow Lake and the flowers were coning along Iron County Road G, she said.

“They are late this year,” Patzke said.

The Lupine Junefest is good exposure for the garden club and it’s a chance for members to mingle with the community and all of the agencies and nonprofit groups that work to keep the area beautiful and to protect the wildlife, Patzke said.

The garden club sells seeds and lupine plants at the event. There was also information about the July 27 Mercer Garden Tour.

Norita Schottler and her husband Robert, come annually from Wausau for the bike tour. The couple have endured the rain and wind years and were pleased with the warmth and sunshine on Saturday.

“It’s a really well organized event,” Norita Schottler said. “They have done a nice job organizing it and keeping it together. I think it’s well planned and safe.”

“We just enjoy being out in the sunshine and around all of the people,” Bill Vernetti said. “Its just beautiful out. I love the heat after these long winters.”

Bob Jacquart, owner of a fabric products company in Ironwood, rode with a team of bicyclists including Dan Jones, Larry Jones, Lori Booth, Jack Wagener, Jeff Burke, Dave Hagelin and Bill Wagener. Many of the group wore a company uniform and took the longer tours with their professional touring bikes.

Ginny Kemplin, a member of the Woods and Blooms Garden Club, said she has volunteered since the first Lupine Junefest and enjoys the interaction with the town and the visitors.

The registration area was moved under a permanent shelter a couple years ago which has helped to stay out of the sun and wind, she said.

“Last year was so windy people were having trouble riding,” she said.

The Lupine Junefest was organized by a local bicycle club and transitioned to the Mercer Area Chamber of Commerce a couple years ago after the bicycle club met its goal to connect the bike trail from Mercer to Manitowish Waters.

“It took 10 years to get the money for our bike trail but we did it,” Kemplin said.

“We are so blessed in this area between the MECCA trails here in Mercer, and the WinMan Trails in Manitowish Waters and Winchester,” he said. “We have 21 kilometers of groomed class, diagonal stride as well as skate-ski trails.”

The Mercer community is an inclusive group and the collaboration between organizations works to promote the area and encourage people to visit, move here to raise families or retire, he said.

Mike Ondresky, president, president of Iron County Outdoor Recreations Enthusiasts, had a similar message about the trail system being valuable for all the “silent sports.” The three-year-old organization does environmental presentations, organizes bike rides, kayak trips and is looking at starting winter activities, he said.

“The group is growing and people are showing interest,” he said.