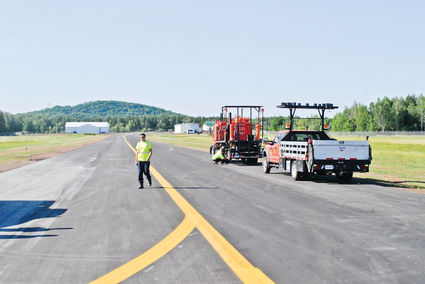 PAINTING CREWS prepare their truck for departure as they finish up painting the taxiway of the Gogebic-Iron County's Airport Thursday morning.

Ironwood - Phase 1 of the reconstruction of the Gogebic-Iron County Airport's taxiway neared completion as crews added temporary markings to the taxiway Thursday.

Tom Janssen, an engineer with Mead & Hunt, said the old asphalt was removed by the airport's fixed base of operations as well as the taxiway before the surface was regraded and fresh asphalt laid down.

"We have to stop work for 30 days while the asphalt surface cures out," he said. "The volatiles cure off so the permanent painting holds tight to it."

Michael Harma, manager for the airport, said the airport remains open for general aviation use while the asphalt cures.

"They use a special mix," he said. "The state inspects the special blacktop for airports."

Harma explained the weight of the plane is distributed over small tires which places a lot of pounds per square inch on the asphalt.

The project's cost of just over $920,000 was mainly covered by grants from the Federal Aviation Administration, Harma said, adding the project was needed in order for the airport to remain open.

"We have to keep up our pavement otherwise the FAA will just shut us down," he said

Joe Bonovetz, chairman of the airport's board, said the pavement is redone about every 20 years.

Future projects in the airport's 5-year plans include pouring a concrete heliport with a ramp and parking area for jets.

The airport provides daily flights to both Chicago and Minneapolis as well as parcel delivery.

Bonovetz said having an airport is important to the vitality of the community.

"It's like a three legged stool with the hospital, the college and the airport," he said.

Harma admits the airport might not be as busy as others, but said the facility is an "important commercial connection for the community."