Ironwood woman gets 11 years in prison for Pines arson 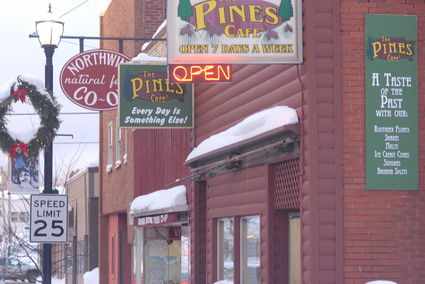 A LIT open sign may hint at progress, but the Pines Cafe remains closed after a fire in August destroyed the restaurant's interior and the apartments above it. Hykesha Martin was sentenced to 11 years in prison Tuesday for starting the fire.

Bessemer - An Ironwood woman will serve at least 11 years in prison for starting the fire above the Pines Cafe earlier this year.

Hykesha Deshay Martin, 24, was sentenced to 11-50 years for first-degree arson in Gogebic County Circuit Court Tuesday for the August fire above that destroyed the downtown Ironwood restaurant and apartments above it.

"You endangered lives, property - and that's just (the tangible things). There are other things that were involved here. There were people's hearts and souls that were in that cafe," Circuit Judge Michael Pope said while imposing his sentence. "There were people that used that as a meeting point, a gathering point for a community.

"There was much more there than just a structure that was damaged by your actions, there was a community that was harmed by your actions ... because of that, this is one of the more severe crimes that this court has had to deal with."

The charges stem from the Aug. l1 fire at the downtown Ironwood restaurant and apartments above it. Although firefighters were able to contain the fire in approximately 20 minutes, it damaged the two second floor apartments and the restaurant below - which has remained closed since the fire.

Prior to Pope imposing his sentence, the restaurant's owners - Susan Graumann and Janice Miskovich - had the opportunity to address Martin during their victim impact statement.

"You took their jobs, their livelihoods, they did nothing to you," Graumann said, referring to her employees. "(We) spent 18 years building something, and you took it away - for what reason? You just decided to take it away and you sit there with no remorse on your face. You should be ashamed of yourself."

Miscovitch called the crime "self-centered," saying not only did the fire hurt her and the other Pines employees, but that Martin couldn't even be bothered to let a pet cat out or warn the person in the neighboring apartment.

"I hope you can sleep at night and look in the mirror on what you did to all these innocent people," she told Martin.

Martin pleaded guilty to first-degree arson in October as part of a plea agreement that had one count of arson-preparation to burn a dwelling and one count of third-degree killing or torturing an animal dismissed Tuesday.

As part of the plea agreement, Gogebic County Prosecutor Nick Jacobs agreed to request a sentence within the state's guidelines of 6.75 years to 11.25 years.

Calling the case "One of the most senseless crimes my office has handled since I've been prosecuting attorney," Jacobs asked Pope to impose a 10-year minimum sentence. He added that, in addition to the financial costs, there's no price tag for the loss of the 18 years of work put into the business.

At her plea hearing, Martin said she didn't remember exactly how the fire started but that it happened after she poured lighter fluid on the bed in her husband's apartment above the restaurant.

In recommending a sentence at the lower end of the state's guidelines, defense attorney Doug Muskett said there was no justification for Martin's actions but argued she was in a "heightened emotional state" when she started the fire.

Martin received a jail credit of 128 days for time served prior to sentencing.

Pope also ordered Martin pay $391,630 in restitution to the restaurant owners and their insurance company for damage caused by the fire.