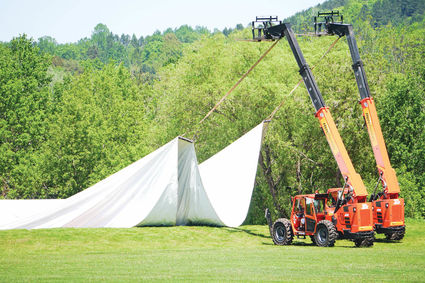 Workers use two diesel boom lifts to pull the tarp of the inflatable dome off of the Pat O'Donnell Civic Center rink on Wednesday. The temporary dome is being removed in order to construct a permanent shell over the facility.

Ironwood - With the temporary inflatable dome removed on Thursday, the work now starts on the new structure that will be the new permanent arena to replace the old Pat O'Donnell Civic Center.

When the dome was initially deflated, the material was still wet and could not dry out as it draped like a bowl over the hockey boards and plexiglass, said Jim Collins, chair of the civic center board. The water quickly drained from the reinflated dome and it dried out over the course of a few warm, dry days, he said.

Nasi Construction will now start work on building the shell of the permanent metal structure, he said. The company is confident that work will be complete in time to open for the winter hockey and figure skating season.

There were always attempts to make the ice skating venue a space for other events such as concerts, wedding receptions and conferences, he said. The new facility will do more to attract those events and activities all year.

"It's more than just an ice rink; it's a multi-use facility," Collins said. "Our goal is that once we're up and running again we're going to use it for more than just ice skating."

The board and management also wanted to include summer ice time at the arena, he said. For one reason or another that didn't work out but it may be possible to do that now with the new arena, he said.

The first phase is to get the building shell constructed over the existing ice rink and structures that were salvaged from the previous building, he said. The contracts for rebuilding the locker rooms and other work inside will be announced soon so that workers can start on the interior as soon as possible.

"Once the building is up then things like the boards can be worked on and other stuff can start happening," Collins said. "It's just getting the building up and in place."

The replacement or refurbishing of the boards is scheduled to be completed by Sept. 18, he said. If the rink and the other major work is completed by fall then the facility can be used even as the detailed work continues, he said.

The options to refurbish the current 42-inch dasher boards in use for over 40 years, will be considered along with looking for bids on new or used boards, according to Collins at the civic center board meeting Monday.

One factor with used or new boards is that they can be fitted to the existing 200 feet by 85 feet NHL-size rink pad, he said. The preference is to keep the current 24-foot radius cornering to fit the existing concrete pad with freezing pipes. Some boards are designed with the 28-foot radius which doesn't present an issue to the skaters, but leaves the potential to cause damage to the pipes when drilling through the concrete.

"We want to keep it at a 24-foot because that is where our ice surface is at right now," Collins said. "We are getting bids on brand new boards with the 28-foot radius and the 24-foot radius, and two different styles of glass."

The current plexiglass sheets are 4 or 5 feet above the dasher boards at various points around the rink. The new sheets will stand 6 feet. Bids will help the board decide whether to go with heavier tempered glass that will withstand scuffing and stay clear longer, or various styles of acrylic plexiglass which is lighter and less expensive. There will also be the net to stop pucks that go over the glass from going into the bleachers.

"We don't have the final plans to show all the details because they (insurer and architect) are still tweaking it all out," Collins said.

What is known is that the entrance, lobby, concessions and player areas will be more open and with a better flow design than was in the original building, he said.

An anonymous donor is going to help improve the concession stand area with utensils, counter space, seating and tables, he said. The donor wants the concession area to look really nice because of two large windows that will be facing the southwest corner to look out at the Mount Zion Ski Hill and Gogebic Community College campus.

"So people will be able to sit and have lunch between games and watch all of the skiers and tubers and the campus," Collins said.

The bleacher seating will be around 600, which is roughly the same as the original arena. A hockey tournament or the figure skating performances often fill the arena, but with multiple shows it's been manageable, he said.

The architect has not yet indicated the standard choice for lobby flooring, he said. Whatever flooring is selected it will be "skate safe," meaning that hockey and figure skaters can walk on the surface without damaging skate blades or the flooring.

"There are options with that but we don't know what they are going to give us and if we choose something different there might be a cost difference and that might be our cost (to absorb)," Collins said.

The new light-emitting diode (LED) lighting will use less energy while providing brighter and more even lighting on the rink, he said.

"It will be brighter and better than any lighting we've had in there before," he said.

The bathrooms and locker rooms will be brought up to code and the costs associated will be incorporated into the architects planning and will not be passed along to the city, he said. There were preferences added that were included without increasing the costs, he said.

A Friends of the Arena group is forming to inform the public that the millage renewal for the civic center is coming up, Collins said. The staff and board are prohibited from campaigning for the millage.

"Ironwood is very good about supporting this facility," Collins said.

Jim Mildren, who serves on the civic center board as an Ironwood city commissioner, said at the meeting Monday that he would like to see a marketing campaign to promote the facility. As winter nears it is important for the public to be aware of the activities available to them, he said.