One dead in Bessemer fire 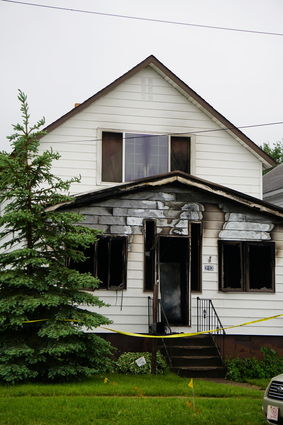 Tom LaVenture/Daily Globe POLICE TAPE skirts a house Wednesday morning which was damaged by fire that claimed a life on Tuesday evening at 213 Sellar St., in Bessemer.

BESSEMER - One person is dead following a house fire in Bessemer on Tuesday evening, according to the Michigan State Police.

Troopers from the Wakefield Post were dispatched to a structure fire at 213 Sellar St. in the city of Bessemer at approximately 9 p.m., according to an MSP press release. Upon arrival the house was fully engulfed in flames.

Troopers attempted to enter the residence to locate anyone inside but were unable to due to the intense flames and smoke, according to the press release. Bessemer City and Bessemer Township fire departments responded to the scene and extinguished the fire.

When the fire was extinguished troopers discovered that a person had perished in the residence. The MSP Fire Marshal and an MSP accelerant detection K-9 were called in to investigate the cause of the fire.

The name of the victim is not being released at this time until relatives can be notified.

The fire and death are still under investigation.

"We cannot provide anything further until we receive an update from the fire marshal," said Sgt. James Revoyr, communications officer at the Wakefield Post.