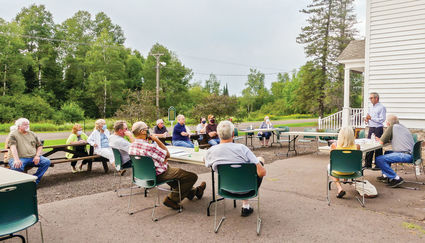 GOGEBIC COUNTY Clerk and Register of Deeds Gerry Pelissero, standing to right, addresses members of the Gogebic County chapter of the Michigan Townships Association at their meeting last week outside of the Erwin Township Hall in Erwin Township. Sitting at the table next to him are MTA Secretary Vicky Finco and Chair John Cox. .

ERWIN - Members of the Gogebic County Chapter of the Michigan Townships Association got a lesson in election rules at their meeting last week outside of the Erwin Township Hall.

Gerry Pelissero, Gogebic County Clerk and Register of Deeds, provided the rundown as guest speaker of the evening.

His aim was to provide procedural clarity in the wake of several changes that Michigan has undergone in recent years. He said he also, ultimately, wants to "see every vote count."

Pelissero began by explaining that this year's Aug. 4 primary election was different in that the state opted to send all citizens an invitation to vote by absentee ballot due to COVID-19.

Other voting protocol also has changed - and changed again.

Prior to 2018, Michigan's primary voters could vote "straight party," which meant they could indicate their party choice, after which their vote then would be cast automatically for all candidates in that party.

One problem with that system, said Pelissero, is that "you get voter drop-off" in other voting categories such as proposals.

Hence, in 2018, he said the state dropped the "straight-party" option and required primary voters to submit a separate vote for each candidate.

"Straight party is now back," he said, "so you can fill in one oval and walk out." He cautioned, however, that voters should find the non-partisan section of the ballot so that they can register their choices on those issues as well.

In a phone interview last Thursday, Pelissero said primary elections are different from general elections in that the former require voters a designated party to vote only for the person in that party.

"Even if you like someone in some race from another party, you can't vote for that person in the primary," he said.

In the general election, he said there is no option to vote a straight ticket. Instead, he said you can decide in the voting booth which party and which candidate you wish to choose in each race.

Because of that flexibility, he said when a Republican or Democrat declares that he or she is becoming an independent, it's really more of "a personal gesture."

Pelissero noted that local clerks will start the process for the Nov. 3 general election on Sept. 21.

For people intending to vote by absentee ballot, he warned, "Pay attention to the ballot instructions." He said it's important to follow each instruction precisely and to sign the ballot yourself or the ballot won't be counted.

In relation to readiness, Pelissero said citizens voting in person also have the option to register to vote at the last minute. "They can register with their local clerk and vote on that same day."

As a "stop-gap" against fraud, Pelissero said once someone registers in one location, "we lock them in" so they cannot register again at another state location.

Likewise, if you recently moved from another town in Michigan to Bessemer, he said the system will automatically disable your registration within your previous town when you register in your new town. People moving from out of state will be tracked via driver's licenses, etc.

He warned that anyone caught trying to play the system will be "subject to election fraud."

At the meeting, Pelissero concluded that he hopes Michigan's presidential winner clears more than 1%. In 2016, President Donald Trump beat Hillary Clinton by less than 1% in the state, which resulted in demand for a costly recount.

In a nod to COVID-19 concerns, members of each of the six townships sat at designated tables and the traditional meal prior to the meeting was traded for beverages.

In other news, association members also:

-Were reminded by Cox that he and Finco will retire from their positions after the association's next meeting in October. "Maybe we should do an election next time," he said.

-Learned from Jim Lorenson of the Gogebic County Board of Commissioners that exploration is underway to secure ambulance service from Land O'Lakes, Wisconsin, to provide service in Watersmeet.

-Learned from Lorenson that the county plans to purchase 4,000 acres of private land that are now blocking county forest land. He said an application will be made for a Michigan Trust Fund grant to cover most of the cost.

-Learned from Bessemer Township Clerk Debbie Janczak that renovations of the Ramsay Memorial Park are nearly complete. "Hopefully, next year we'll have a lot more people taking advantage." Finco also commended the extension of the Iron Belle Trail from Bessemer to Ramsay, calling it "the most gorgeous part of the trail."