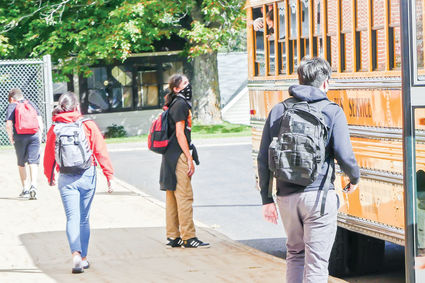 AS THE First full day of school ends at the Watersmeet K-12 School on Wednesday, some students stop to talk through a bus window before heading home.

Watersmeet - Wednesday's first full day of school this year "went as well as it could," according to Gerald Pease, superintendent of the Watersmeet K-12 school.

"Nobody knows all the answers," said Pease in relation to addressing the current COVID-19 pandemic, but he said school officials and other community members are trying their best to create a safe environment for students.

Pease did not yet have an official count of this year's students, but he said that on Tuesday's kick-off - which was a half-day - about 100 kids attended in person.

He estimated that about 50 kids or their parents are opting for distance learning. The superintendent believes that a smaller population of students within the school will aid social distancing.

He added that staff also are educating students on how to stay safe. The Watersmeet Township School District has invested in personal protective equipment, as well as a variety of cleaning supplies.

The superintendent said that one new item is a backpack with which a janitor can apply a sanitizing spray at the end of the day. "It will sanitize within a few hours the entire school," he said, explaining that they will use it a couple days a week.

Overall, said Pease, the goal is to start off as normally as possible while also recognizing that they are navigating dangerous times.

He said he has been engaging in nearly weekly meetings with other superintendents and the Western Upper Peninsula Health Department, whose staff he said have been "very helpful."

"It's been a learning experience for all of us," he noted. "There're so many variables and they always change, so it's like a moving target" and hence "frustrating for everyone."

Another bonus to help students this year will be new Chromebooks for both students and teachers. They are the result of about $640,000 in grant funding secured by the Lac Vieux Desert Band of Lake Superior Chippewa Indians.

According to Bruce LaPoint, community planner for the Lac Vieux Desert Tribal Offices, about 65% of Watersmeet students are from the tribe. The school even has a Native American Studies teacher, Wade Wiartalla, on its high school staff.

In homage to the school's combination of students, a large, collaborative picture featuring a popular diversity theme is on prominent display on one of the school lobby walls.

It consists of what appear to be several dozen multi-colored paper hands all piled up into what looks like a blossom.

The accompanying text reads, "We are each unique and beautiful, but together we are a masterpiece."