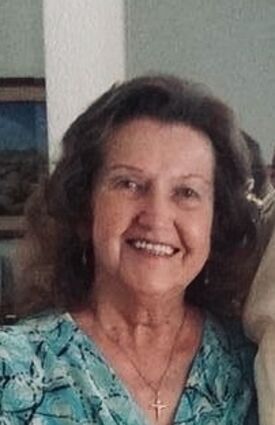 Millie was the daughter of Russel H. and Mildred V. Palmer, born on Dec. 24, 1936, in Hillsdale, Michigan, where she was raised and attended high school. She later studied electronics at Jackson Community College.

She had worked at a number of places locally, including Gogebic County Sheriff's Department, Gresham Family Dentistry, and a couple bars and restaurants in the Ironwood, Michigan, and Hurley, Wisconsin, area. She was retired for the past 29 years after marrying her husband, Ralph, in 1992, at Our Lady of Peace Catholic Church in Ironwood, where they were members.

Millie met Ralph in 1986 after she had advertised the sale of an ultralight aircraft on the radio. He purchased the aircraft, and she met the love of her life. Together, they have lived a fulfilling life, initially traveling in their motor home to visit family and friends around the country, ending up in Imperial Beach, California, where they spent a couple years before making their permanent home in Laughlin.

Millie's love of travel included many cruises, until the onset of Parkinson's disease no longer permitted such travel. But she, along with her husband and their cat, Sam, were especially thrilled when friends and family came to visit them.

Millie had many hobbies and interests, including crafts like quilting, basket weaving, collecting antiques, and reading. Genealogy and cherishing old photos were also important to her. But she will be more likely remembered for her compassion and love for her family, which far exceeded actual bloodlines. Of special mention are Mary and Shari, and their families, as well as Jeff and Donna, who have been such blessings in her life.

She was preceded in death by her parents; a brother, Russel; three half sisters, Betty, Mary and Isabelle; a half brother, William; a stepson, Ken Kloes; and son-in-law, David Davis.

Cremation has taken place, and she will eventually be laid to rest here in Ironwood near her family.

There are no plans for a service. St Jude's Hospital for Children was her favorite charity for memorial donations.