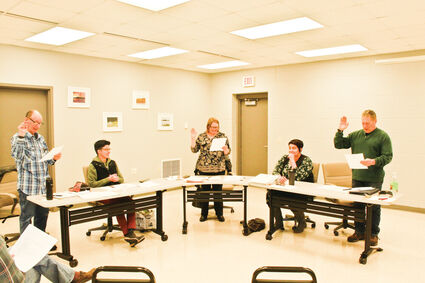 Montreal Common Council members take the oath of office at the council's regular meeting on Tuesday after being elected on April 5. Standing and being sworn in, from left, are returning council member Bill Thomas, returning Mayor Kelly Traczyk and new council member Steve Fiene. Sitting down are council members Ashley Sorrels and Maleah Cummings, who did not need to seek re-election this year.

MONTREAL, Wis. - A new councilmember was sworn in at the Montreal Common Council meeting on Tuesday. Following the meeting, Steve Fiene is now one of two council members for Ward 1 along with Maleah Cummings.

"It's a big seat to fill but I'll be able to do it, to the best of my ability," Fiene said about his appointment.

Fiene is filling a position left vacant by Ken Saari, who did not run in the Iron County 2022 general election. Incumbent Mayor Kelly Traczyk and council member Bill Thomas also took the oath of office again on Tuesday, having r...