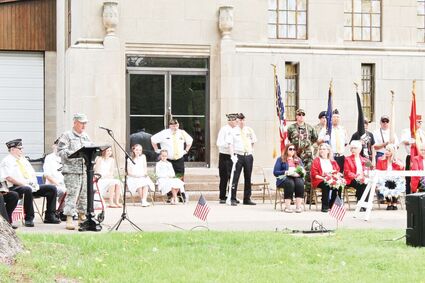 Ironwood - In observance of Memorial Day and U.S. military personnel who have fallen in the line of duty, the Ironwood American Legion Post 11 hosted a service in the Riverside Cemetery in Ironwood on Monday.

David Manki, a retired U.S. Army lieutenant colonel and Junior ROTC instructor at Luther L. Wright High School in Ironwood, was guest speaker at the Memorial Day service. Manki thanked those in attendance at the service, saying their presence was significant to veterans and their families - including those interred at the cemetery, who were "looking down on us at this very moment."

Manki said that U.S. military dead are buried in 106 national cemeteries and 23 cemeteries in other countries, while Riverside Cemetery is the final resting place of more than 160 veterans, including 103 World War II veterans, from the city of Ironwood and Ironwood and Erwin townships.

"Who are those Americans we honor today? They weren't movie heroes. They were average citizens - loggers, miners, farmers, clerks, newly-graduated high school students - people who shared a commitment to freedom and paid with their lives to keep our country free," Manki said. "Our country needed them and they did what needed to be done."

Following Manki's speech, Ironwood Mayor Kim Corcoran made a statement on the importance of Memorial Day.

"Memorial Day is often considered an unofficial beginning of summer. We dust off our grills, we go to parades, we kick off special events, we celebrate with families. And we get together and we enjoy the people who we're with. But really, it's much, much more than that. Today is about remembering and it's about gratitude," Corcoran said.

Pastor Tom Rouse delivered an invocation prayer and benediction at the event. American Legion and auxiliary members placed wreaths for those who died in World War I, World War II, the Korean War and the Vietnam War.

The memorial choir sang "How Great Thou Art," "America the Beautiful," "Navy Hymn" and "Battle Hymn of the Republic," while the Luther L. Wright band, directed by Kirk McBrayer, performed the national anthem.

The service was preceded by a parade that started at the Memorial Building and marched just over a mile to the cemetery, stopping briefly at the memorial on the corner of Ayer and Suffolk streets along the way.