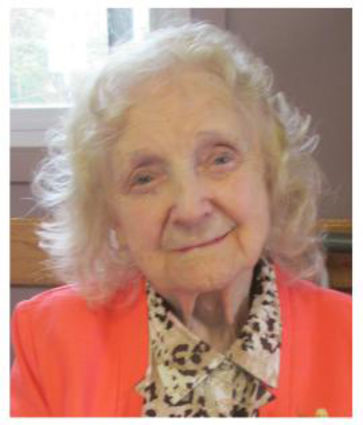 The former Adeline Schneider was born Sept. 9, 1914, in Park Falls, daughter of the late William and Margaret (Holfels) Schneider, and graduated from Park Falls High School in 1932. She attended Price County Normal and taught in Butternut for two years, then attended Milwaukee State Teachers College for three years. She taught in Manistique, Mich. for three years, Beaver Dam for one year, Minneapolis for one year, and for 30 years in the Hurley School District, from 1950 until her retirement in 1980.

Adeline was a member of St. Mary's Catholic Church in Hurley and its Council of Catholic Women, served as president of the North Central Deanery for three years and was secretary of the Diocesan Council of Catholic Women for two years. She also was a Girl Scout leader at St. Mary's for 15 years. During World War II, she was a clerk at the Army Regional Accounting Office in Chicago.

Adeline was a member of the Auxiliary to Iron County Veterans of Foreign Wars Post 1580, having served as past president and treasurer, and was the initial organizer and first president of the Auxiliary to the Military Order of the Cootie, Hurley Pup Tent 35.  She volunteered in fund raising for the American Heart Association and the American Cancer Society, and assisted with local church conventions and VFW conventions. She sold Vivian Woodard Cosmetics and was local distributor. She was also a member of Alpha Delta Kappa Teacher's Sorority and the Wisconsin Retired Teacher's Association. She enjoyed  traveling with  Doc in their motor home to Texas and Florida, as well as other extensive travel, and loved spending time with her family.

Rite of Committal and interment will be in St. Mary's Cemetery, Hurley, in the spring.

Arrangements have been entrusted to McKevitt-Patrick Funeral Home, Inc., Ironwood. Condolences may be expressed online at mckevittpatrickfuneralhome.com.