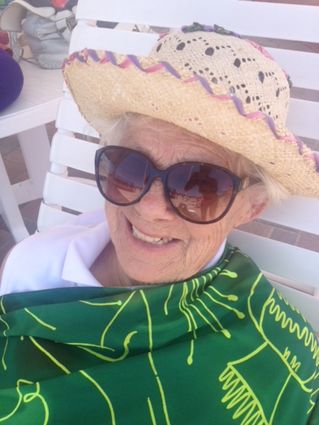 EWEN, Mich. - Dorothy was born on May 21, 1925, to Rena and Harry Fleming in Breckenridge, Minn. The family moved to Ewen and then to Maple Grove on Taylor Road.

At age 12, Dorothy lived and worked for her Aunt Bernice (Taylor) Greeno at the Greeno Hotel in Ewen, where she graduated from school in 1943.

After graduation she went to Detroit with Jane (McCory) Huhtala and worked for the war efforts as a stamp operator and attended beauty school. While working as a stamp operator, she injured and lost her thumb. Because most of the men were in the service at this time, Dorothy served as a stand-in best man at Arne and Jane Huhtala's wedding. It was a memorable honor for her.

Her passions in life were her family and community. She participated in Boy Scouts, 4-H, church guild, American Legion Auxiliary (71 years), civic association, Bruce Crossing Settlers Depot Gallery and many others too numerous to mention.

Dorothy and her sister-in-law and loving friend, Barbara (Tyyska) Fleming, purchased the Ottawa Shopper from Tom and Florence Haarala in 1956. They published the shoppers guide together for 29 years until she retired in 1985.

Dorothy and Tom owned and operated the Big Spruce Golf Course for five or so years. They spent their winters in Florida since 1974. Dorothy continued after Tom's passing in 1997 until her debilitating stroke in November 2012. She moved to her Ewen home where she stayed until November 2014. Then, she moved to long-term care in Ontonagon.

She was preceded in death by her parents, Harry and Rena Fleming; her loving husband, A. Thomas; and her brothers, sisters and their spouses, Jean (Ollie Dove, Robert Findley), Glen (Betty), Raymond (Martha), Jim, Floyd and Tom.

Expressions of affection in the form of a charitable contribution in Dorothy's memory may be sent to American Legion Post 41 Auxiliary, Box 212, Ewen, MI 49925.

A Mass of Christian Burial will be celebrated Friday, May 25, at 11 a.m. EDT at Sacred Heart Catholic Church in Ewen, with the Rev. Antony Kalapura, celebrant. There will be no visitation prior to the Mass.

Jerald Rocco, owner and manager of Lakeside Memorial Chapel Inc., in Wakefield, is assisting the family. Condolences may be expressed online at lakesidememorialchapel.com.