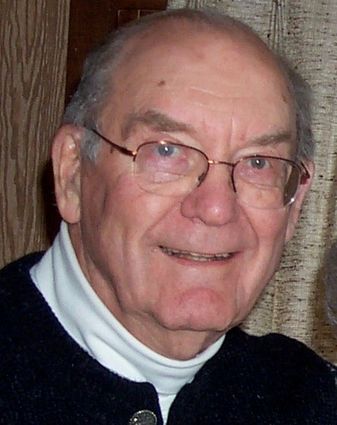 Graduating in 1947 from the Iron Belt K-12 School, he was Valedictorian and active in the music, forensic, and basketball programs in addition to his academic accomplishments. Furthering his education resulted in a bachelor's degree in chemical engineering from the University of Wisconsin – Madison in 1951. Additional studies continued at the Morris County and Sussex County N.J. Community College's, and the University of Delaware. On July 2, 1952 in Wilmington, Del. he was united in marriage to Helen E. Truitt.

He was employed by Hercules, Inc. for 32 years in various technical, supervisory and management positions. Homes included Wilmington, and several other communities during those years of employment, e.g., Kenvil, Succasunna and Fredon, N.J. Work and personal travels took him to every state in the USA, and in six nations. As an international consultant, he served as an industry trade association technical representative to the United Nations Sub-Committee on Transport of Dangerous Goods. He retired in 1984, at which time he and Helen, moved to the town of Morse where they built their dream home on family property on Lake Galilee, near Mellen.

Following retirement he was active in economic development organizations, initiatives, and board memberships in Ashland, Iron and Gogebic counties as well as in regional organizations, and as an Elder in the United Presbyterian-First Congregational Church in Ashland. In addition to continuing his work as a consultant and UN technical representative after retirement, he also served as a volunteer in many positions, such as a SCORE counselor to small business for 11 years, and was on several town committees in the town of Morse and city of Mellen. Voluntary positions also included the Boards of Directors of Highline Corporation in Hurley, the Senior Center in Ashland, and the Essentia Health Patient Partner Council, and service at the information desk of Memorial Medical Center.

An avid outdoors man, activities included making firewood, hunting, fishing, golfing (where he golfed at 28 local, national, and foreign courses), and skiing. Other brain-stimulating activities included bridge, cribbage, crossword and sudoku puzzles, reading, TV and internet (especially news and sports) and maintaining an impressive file of organized personal health statistics. A proud Badger fan, attending the UW games was a must in early years of retirement. Other favorite teams included the Milwaukee Brewers, Detroit Tigers, and college teams where friends and family had a presence.

Preceding him in death were his parents, wife, Helen to whom he was happily married for 60 years, and a brother, Howard.

Clyde is survived by three sons; Carl Warren Oscar (Glenda) Eilo of Bristol, Tenn., Eric Brion (Meghan) Eilo of Mellen, and Kurt Aaron (Corrine) Eilo of Anchorage, Alaska; special grandchildren, Carla Eilo (Dave) Gross, Lauren (Dan) Eilo and their mother Adana Eilo, Ethan Eilo, Clark (Molly) Penney, Curtis Penney, Kendall Eilo, Eric T. Eilo, and Olivia Helen Eilo. A loving, devoted husband, father, and grandfather to his extended family, he hopes to be remembered for his welcoming personality, friendliness and helpfulness, pride in his Finnish heritage, strong family ties, and for his steadfast faith. He was often quoted as saying, "It seems my life has been a series of hellos and goodbyes to wonderful people." At his request cremation has taken place.

Following a brief memorial service at the United Presbyterian-First Congregational Church in Ashland, on Tuesday, Jan 29, at 11 a.m. with Reverend James Deters officiating, a luncheon will be served in the dining room of the church.

A private inurnment next to Helen will take place in the spring at the Cayuga Union Cemetery in the Town of Morse.

Funeral arrangements will be provided by the Mountain Funeral Home of Ashland. Online condolences may be left at MountainFuneralHomes.com.

It is suggested that in lieu of flowers, any memorial gifts in his name be directed to the Endowment fund of the United Presbyterian-First Congregational Church, 214 Vaughn Ave., Ashland, WI, or the University of Wisconsin- Madison Foundation.