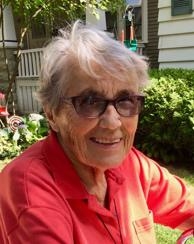 Grand-daughter of Catherine (Cassie) Ellis, (of Ireland) and daughter of Whip,

Nurser of wounds and illnesses,

(Most recently the Brewers and always her Maple Leafs)

Advocate for the persecuted,

Left welcome notes on the chalk board.

Listener to the distressed,

Waiter-upper for teens and visitors,

Poo-poo-er of her own scrapes, breaks and bruises,

I'm fine was all she'd say.

Poo-poo-er of your scrapes, breaks and bruises too,

Like it or lump it. Offer it up or, No sniveling, we were counseled.

Completer of Crosswords, (always in ink)

Admirer of JFK and RFK and loyal to the Queen,

Baker of pies and fruitcakes,

Citizen of Canada and the USA,

Enjoyer of every day she lived and

Daughter of Florence M. and Donald B. Smith.

Appreciator of each and every one of these and theirs. She ran us through all the names until the end.

Our family would like to extend our sincere appreciation and thanks to the staff of Ramsey Woods Memory Care and AseraCare Hospice for the wonderful, loving and compassionate care they provided Muriel during her last months.

Burial services will be arranged in Oswego, N.Y., in October 2019 on a date to be determined.

Memorial donations may be made to the Ironwood Carnegie Library at joomla.uproc.lib.mi.us/ironwood.